A (Fictional) Powerbroker’s Rules for Success

Written By: Lou Bortone | Comments Off on A (Fictional) Powerbroker’s Rules for Success 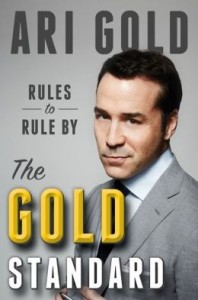 Ari Gold is the fictional uber-agent and star of HBO’s Entourage series, which is now a feature film.  Gold is played to perfection by Jeremy Piven, who gives the character his brash, over-the-top, but somehow lovable persona.

Ari is said to be modeled after real-life Hollywood powerbroker Ari Emanuel, one of the most powerful (and colorful) men in the entertainment industry.  Both the TV Ari and the actual Ari can be bold, unapologetic and downright obnoxious –  but there’s no denying their success or swagger.

The lines between fiction and reality are often blurred on Entourage, with real-life celebrities playing themselves and making numerous cameos. To make matters more sublimely fuzzy, Ari Gold now has a new business book out called The Gold Standard: Rules to Rule By.

In it, he outlines 18 sometimes brilliant, often ruthless “rules” for gaining power and achieving total domination.  Among the more practical of Gold’s guidelines are: “You Don’t Have Any Power Until you Have All the Power,” “Your Most Important Product is Heat,” and simply, “Be Everywhere.”

In “Rule #2, Happiness Can’t Buy Money,” Gold explains in colorful language and brutal honesty, “Money is a resource that makes it easier for you to find your purpose and achieve your goals, not because you are buying happiness but because you are eliminating the desperation that drains happiness and distracts you from your purpose.”  Not bad for a fictional character!

He continues: “Loving your work doesn’t mean finding a job you can tolerate for eight hours a day, but rather a job that gets you flying out of bed in the morning like a Jack Russell who just had a firecracker stuffed up his a**.”

Ari’s amusing, if not astute wisdom can be used as a template for just about any business scenario.  So to piggyback on Gold’s Rules to Rule By, here are a few more hardnosed guidelines to be more “Golden”:

Any meeting they can’t start without you is a meeting worth attending. – This tidbit is actually from Kevin Spacey’s boss-from-Hell character, Buddy Ackerman, in Swimming with Sharks.  But it fits in perfectly here, as Buddy was another infamous entertainment business ballbreaker, not unlike our friend Ari.

Extreme problems often require extreme solutions. – This ancient Italian adage is frequently attributed, not surprisingly, to the Mafia.  This seems appropriate, as Ari Gold proudly boasts how he runs his company like the Mob.  As he says in his book, “I have always run my business like a Mafia don. I look for people who are tough, ambitious and loyal, and I give them the opportunity to show me that they deserve a spot in the family.”

Make your punishment swift and show no mercy. – Niccolo Machiavelli, philosopher and author of The Prince, said: “If an injury has to be done to a man it should be so severe that his vengeance need not be feared.”  Ari Gold has no doubt studied Machiavelli closely, as Gold is notorious for squashing his enemies like bugs.

Choose your battles carefully. – You can’t fight every battle effectively.  You need to pick and choose.  As Sun Tzu reminds us in The Art of War: “He who knows when he can fight and when he cannot, will be victorious.”  Of course, if you don’t need to fight at all, Sun Tzu believes that’s even better, since “The supreme art of war is to subdue the enemy without fighting.”

“Shake with your right hand, but hold a rock in your left.” – We’ll wrap up with a quote from another one of Kevin Spacey’s ruthless characters, “President” Frank Underwood on House of Cards.  This harkens back to Teddy Roosevelt’s “Speak softly and carry a big stick” philosophy, but it’s a sentiment that Ari Gold would no doubt endorse – or perhaps adjust to say “Scream loudly and carry a big stick!”

You may think twice before acting as audaciously as Ari Gold, but next time you’re stood up for an appointment or left hung out to dry at a meeting, you might just ask yourself: “What would Ari do?”