Written By: Shep Burr | Comments Off on A Template for Sales Growth – Ask More Questions 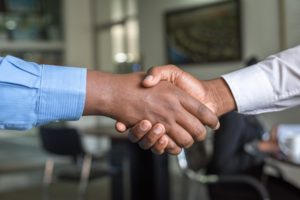 SELL – DON’T TELL is a well-worn sales phrase. Yet, it is astonishing how seldom it is practiced, whether by well-dressed, big-ticket sales representatives – or telemarketers in T-shirts.

TELLING is a canned approach, based on assumptions that every prospect values a product’s features in the same order and measure. Sales people who TELL follow the same script, no matter who they are speaking with, and might as well be tape recorders on auto play.

Indeed, shooting at a target in the dark offers about the same odds on closing a sale – it is largely a random event.

Conversely, SELLING starts with a sales representative asking prospects a series of questions to find out what they care about, and why, before saying one word about the product/service. Questions shine light on the issues that need to be addressed and solved for a sale to occur.

Here are two examples of the power of the selling, questions-first approach.

I managed the Chicago office for a start-up trade show display company. At the time, it was necessary to demonstrate the product in person to make a sale. Cold calling was one way to get appointments. You can only imagine how difficult this was!

In order to be successful, we had to get the right person on the phone, get them interested in a demonstration, and schedule an appointment.

After failing countless times using pre-written scripts, we developed a series of carefully crafted questions relating to the prospect’s responsibilities and challenges that could not be responded to with a “yes” or “no” answer.

If we heard objections, we had to be fast with additional thoughtful questions to keep the key prospect engaged. Based on what we learned in the answers, we could react with responsive information and ask for a meeting.

The fact that we had taken a different, prospect-centered approach from other cold callers communicated to prospects that we cared about helping them, and that our solutions might be able to work for them.

This approach was expanded in our in-person meetings, and our office sold so much product that our manufacturing arm could not keep up with us.

Getting ahead for Trammell Crow Company, at the time the largest real estate developer in the country, started with being able to lease a lot of space – in my case for new shopping centers.

I quickly learned that listing features as I gave property tours to prospects didn’t work. This is what our competitors were doing as well.

After several failures, it dawned on me that spewing features was nothing more than a lazy way of asking prospects to sell themselves.

Instead, I developed a list of questions, which I typed up and filled in as prospects responded with important information. They were sometimes surprised that I would not show them space until going through this exercise, but they invariably seemed to enjoy it.

If they were pressed for time, I would reduce the number of questions; however, I would still ask the critical ones.

The process could take 10 to 60 minutes, depending on how descriptive a prospect wanted to be. The longer the better, as far as I was concerned.

Why? It was an opportunity for me to learn more and build a relationship, and it likely meant they would spend less time with my competitors, most of whom would not ask about their wants and needs.

After listening to my prospect’s responses, my sales points could be properly organized and I could say, “You told me that this was important to you, and this is how my project does that.”

After covering that for the 3 to 5 most important things they mentioned, and then giving them the tour, my closing rate went through the roof!

Respecting prospects’ individual needs, and taking time to learn about and treat their challenges and needs seriously, enabled me to lease so much space that I was promoted to development partner in record time.

Develop meaningful questions to determine pain points that your product or service can address, and ask prospects how their business has arrived at this point, what is vital to have, what would be nice to have, and why.

In very broad terms, I like to ask prospects about the importance of my product or service’s features, which gives me the opportunity to know what to showcase and how best to sell once I have all of the information I need.