Written By: Carol Roth | Comments Off on What Your Business Can Learn from the Locked in the Bathroom Story 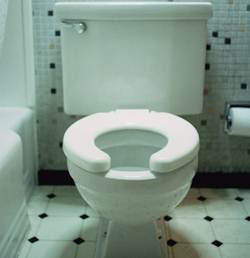 I had shared this story several years ago and since my dear friend said it still brought her to tears of laughter, I wanted to share it with you again, because there is a very relevant business lesson within it.

Preparation is key for every situation, not just the obvious business meetings or job interviews. A couple of years back, I was really glad to live by my “If you fail to prepare, you prepare to fail” mantra.

I had an afternoon meeting with one of my clients at their lawyer’s offices. The offices were located in one of the gorgeous skyscrapers in downtown Chicago with sweeping views of the city and the lake. It was a very large office housing hundreds of lawyers and it took up the entire floor. We met in one of the conference rooms for several hours. The meeting ran a bit later than planned and it was nearly 6:00 pm by the time we were ready to adjourn. I had a decent commute on the train ahead, so I thought it prudent to use the facilities before I left.

I asked my client’s lawyer to show me where the ladies’ room was and he showed me to the front of the office, where the bathroom door was right behind the reception desk. He told me after I was finished to just exit and go to the right to find the elevators.

So, I entered the bathroom where there were two sinks, a second door and a then long row of toilet stalls. When I was finished in the stall area, I headed back to the sinks, washed my hands and went to call my husband to let him know I was heading home and to see if he wanted to join me. Unfortunately, I couldn’t get cell phone reception in this inner sanctum of a very high floor of this particular office building. I figured I would try again when I went outside.

I went to open the main bathroom door to leave and smack- it was locked! I figured I did something wrong and so I went to turn the handle again and again, nothing. The damn thing was totally bolted shut. I banged on the door a few times and said “hello, hello?!” figuring that the reception secretary wouldn’t have left a visitor locked in the bathroom, but there was no response. For about five seconds sheer and total panic set in and I could literally feel the blood draining in my body and my heart beating quickly. It was hard to breathe. I thought, “I can’t f***ing believe that I am going to be locked in a bathroom of a law office all night”.

I got myself together and started to think rationally. I always prepare for emergencies. The first step is bringing my cell phone, so I tried the cell phone again, but no reception. I then went through my bag to confirm another one of my preparations was in place and my trusty snack bars were in fact in my bag. I always travel with food just in case food is needed (and I always need food, I am addicted), including at a minimum a few snack bars and also a bottle of water if possible. So, I had food, water and a whole slew of toilets, so my basic needs would be met for the night.

I started banging on the bathroom door again, yelling at the top of my lungs as I pounded away, “Help! I am locked in the bathroom!” I was panicking, cursing and also sort of laughing at how ridiculous but terrifying the situation was.

I went back to my bag. I also make it a point to carry a pen and paper with me. So I figured I could write a note and slip it under the door and perhaps another lawyer or a janitor would see it. So, I scrawled on my notebook paper, “Please Help, I am Locked Inside the Bathroom!” and pushed the note under the small crack under the door.

I banged and screamed a few more times and thought about how my family would be completely freaking out that I vanished and certainly not guess that I was inside the bathroom of a law office. My car would be at the train station and they would think that something bad (or should I say much worse than my actual fate) had befallen me. I also shook my head at the annoyance of having to potentially spend the night trapped inside the bathroom.

I racked my brain to see if there were any other potential solutions available. I knew that a lot of bathrooms had fire alarms, so I went through the second door back by the stalls and started opening up each stall to see if there was an alarm of some kind. After I passed the fifth or so stall of about a dozen I noticed that at the back wall there was a curve. As I moved around the curve there was, hiding behind the last stall, a second door.

I ran to the door and opened it, to see another freakin’ door in front of it. I didn’t want to be locked inside the vestibule (that would be worse than the bathroom), so I put my purse in the doorway to see if that second door would open. Bingo, it did. I grabbed my purse and high-tailed it out of the bathroom. I then saw the main doors to the elevator and hurried over there to leave. I pushed on the glass doors and found that those doors were locked too! So, I was out of the bathroom but still locked inside the law offices (I was later told that the building has an autolock feature that locks all doors at exactly 6:00 pm and they can only be opened with tenants’ key cards, something that would have been helpful to point out to me prior to locking me in the bathroom).

I figured that there had to be at least one lawyer still working at 6:00 pm and worst-case-scenario there were actual phones, so I set out to find someone who could let me out of the offices. I walked around and around until I found the employee kitchen, where lo-and-behold there was my client’s lawyer heating up a Hot Pocket in the microwave.

I told him I couldn’t get out of the building and he told me about the autolock feature (again, great timing, buddy). I asked him if we could swing past the women’s bathroom as well, letting him know that I wrote a “help” note and that I hoped to get to it before someone else. Unfortunately someone else found the note and either they thought it was a sick joke or more likely, it is posted in the employee kitchen as a reminder of that day when a visitor got locked in the bathroom.

I actually do a hilarious re-enactment of this story in person (particularly the screaming and banging on the bathroom door part), so if we ever have the chance to meet, ask me to tell it again to you. It will be totally worth your while.

But aside from the scary hilarity of it, my preparation ritual was a big help to me in keeping my sanity and should I have not found that second door, keeping me fed, hydrated in decent spirits for the night. Even more than before, I always prepare before I have out of the office meetings by stocking my bag with my fully-charged cell phone, snack bars, water, a pen and paper. I have also contemplated adding a crowbar to the mix. I am sure that the Boy Scouts of America would be proud.

This mantra should apply to your business too.  No matter what you prepare for, there will always be unexpected circumstances, so take care of what you can in advance so you only have one crisis to deal with at a time.

And if you see me on an airplane headed to the bathroom with a pen and my Blackberry phone, now you will know why.