Business Lessons from the Election Aftermath

Written By: Margie Clayman | Comments Off on Business Lessons from the Election Aftermath 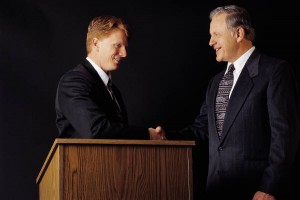 The election is finally over, and now we have had a chance to digest and let the emotion turn to rational thinking. The analysis of how things played out may last until talk about the 2016 election begins, which could be less than a year away.

Aside from all of the partisanship and ugly rhetoric that characterized this election season, there actually surfaced a few important lessons that could be valuable to an entrepreneur.  When you think about it, after all, candidates for political office are like entrepreneurs in a lot of ways. The campaign becomes a business, marketing and revenue are needed, and the “sale” is the candidate him or herself. Although there are numerous lessons that could be learned from both parties, these are the five that came to my mind.

Of course, one could argue that the overriding lesson of this past election season is that being unpleasant does not win you any brownie points, at least not most of the time. Even if you are reacting to something that someone else has said, if people see you behaving in a less than professional way, you are the one that will be viewed as less credible, less stable, or less disciplined. This is true across the board, from how you act within your own company walls to your marketing and sales efforts to your personal social media presence. There is always someone watching these days. What message do you want to send?

What lessons have you been able to garner from this crazy election season? We’d love to hear your thoughts!