Written By: Carol Roth | Comments Off on Business Competition: Fuel or Distraction? 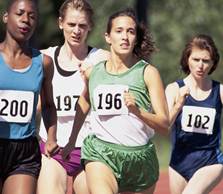 I often see parallels between sports and business.  Let’s take football for example. The player who gets the ball and runs with it to try to score points for his team is not unlike an entrepreneur who takes an idea and runs with it, trying to create revenue for his business.

As the running back or wide receiver is running a full sprint towards the goal line, it is tempting for him to look back over his shoulder.  He knows that the competition is on his heels and it’s hard to resist the urge to check out how close they truly are. But when a player does that, it slows him down, often to the point that the competitor can catch up- or even tackle him.

I see the same thing with entrepreneurs, especially those blazing a trail.  It’s tempting to waste time on the competitors who are following behind, trying to copy or catch us, or even just causing a ridiculous commotion. However, it’s much more effective to stay focused on your own goal line.

Put your energy into running as fast as you can and blazing the path towards the goal, instead of worrying about where your competition is or what they are doing.  If you keep your focus and you have the talent, they won’t be able to catch you.