Customer Service: Don’t Say No – Use the LPFSA!

Written By: Rich Gallagher | Comments Off on Customer Service: Don’t Say No – Use the LPFSA! 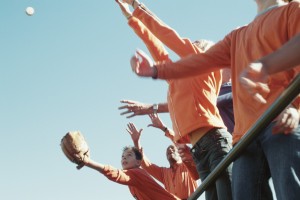 Do you ever have situations where you feel you have to say “no” to clients? And then they get upset about it? I have a story for you.

I am a huge baseball fan. And I often travel to games in Philadelphia, the closest major league stadium to my home in upstate New York. Here is a true story of something that happened to me there a few years ago.

Picture this: I am pulling into the parking lot of Citizens Bank Park on a beautiful Sunday afternoon, en route to Washington on business, for what I was about to discover was a completely sold-out game between the Phillies and the Cubs.

So what did they say to me when I came smiling up to the window wanting a ticket? Being Philly, you might think they would say something like, “Yo, fughettaboutit buddy!” Instead, here is a rough idea of what they did say:

“It’s a beautiful day for baseball, and we would love to see you get into today’s game. Even though we are completely sold out, here is one idea. Sometimes our season ticket holders leave their extra tickets at the gates, and we give those away for free. We can’t make any guarantees, especially this close to game time, but if you don’t mind checking, it would be great if we could still get you in.”

So I checked at each gate. No one had any extra tickets, but everyone was pleasant and encouraging. And soon I realized that I had just circumnavigated ten city blocks, I had no ticket, and I was walking back to my car – happy.

What you were seeing in action is an example of what I call the LPFSA (say that three times fast): the Low Probability Face Saving Alternative. It’s what you do instead of saying “no” to people in your business. The vast majority of the time, it makes people feel a lot better. Here is why it works:

2) It is face saving. We all want to feel like we gained something of value from a transaction. The LPFSA gives people something very tangible: hope.

3) It is an alternative. More often than not, the LPFSA gets people thinking of alternate ways to solve the problem.

Now let’s look at your business. A client is demanding an appointment and you are booked solid? Offer to call them first thing if you have a cancellation. Wants impossible terms? Offer to discuss them with your boss or partner. Insists on something unrealistic? Offer to research alternatives.

One catch, of course: you don’t get to turn the LPFSA into the NPFSA (e.g., No Probability). If you know that something actually has zero chance of happening, don’t offer it. That is just lying to people. Ditto with sugar-coating or overestimating the chances of something happening. The LPFSA succeeds precisely because it allows you to be totally frank about a situation, while speaking the language of an ally. That is why the Phillies – and many others – train their people to use it.

I believe that you should never, ever tell a client no. The LPFSA offers you a kind, mutually equitable way to do exactly that. Try it yourself and see!