Written By: Chip Bell and John Patterson | Comments Off on Exorcise “Traumatic Residue” From Your Organization’s DNA 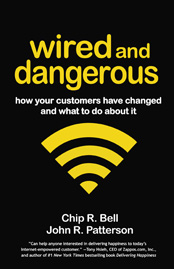 Depression-era parents, worried the ‘30’s would return, docked their kids allowance if a light was left on in a bedroom at supper time.  No one could throw away a piece of paper if it was used only on one side.  And, their children heard many sacrificial stories about “walking to school for miles in the snow… uphill…both ways!”  Such behavior is called “traumatic residue.”

Business has been experiencing post-recession “traumatic residue.”  At the peak of the recession, there were major layoffs and extreme frugality.  Small business failed due to ever tightening economics and reduction in customer spending.  Employees felt deep-seated anxiety the next round of layoffs would include them so they learned ways to cope. Hunker down replaced stand out.  Restrictive trumped speculative.  The “residue” side of a normal survival behavior made sense. But, left unchecked, it takes a toll on small business growth.

Three criteria typically put employees and small-business owners on the “soon-to-fail” list—screw-ups, sheep and slackers.  Screw-ups were the folks who make mistakes—employees who should have never been hired.  Sheep were the super-cautious souls who refused to take any risk.  Slackers were sleep-walking employees who did just enough to get by.  As an adversary economy put a squeeze on thin margins, retaining the deadheads, cowardly and deadwoods were luxuries no organization could afford.

But, now fast forward beyond the 2008-2009 recession.  There is a more insidious byproduct of “traumatic residue” that can have long-term unfortunate consequences. Lodged in the DNA of many organizations, “traumatic residue” has elevated “risk averse” and “looking busy” to a performing art.

The Art of “Shake and Fake”

Risk aversive behavior gives rise to a game of “shake and fake.”  “Shake and bake” is a folksy label for plan and execute. “Shake and fake” is characterized as enthusiastic verbiage around a bold idea but with no intention of implementation.  The objective is to sound bold without actually being bold.

The “Look Busy” objective is to convince everyone you are “up to your eyeballs” in work.  There is a lot of “alligator-killing” but no “swamp drainage.”  Requests are made for reports followed by meetings to discuss the report.  People live in meetings. When you hear someone bragging about being double booked, you are likely looking at a “make work” mentality.  Texans refer to this practice as “three feet and a cloud of dust” —lots of activity bravado; little progress.  Game players often put in long hours fiddling with form and then complain about how hard they are working.

But, the biggest obstacle for small businesses is the spineless, sheep-like approach to the marketplace.  These are the organizations that play their cards close to their vest and dare not venture into anything that might smack of risky or courageous.  Research shows customer expectations have climbed 30+% in the last year.  That requires small businesses to perpetually remain in a state of reinvention.

Success comes from breaking patterns, pioneering methods and constant experimentation.  The old adage of “if it ain’t broke, don’t fix it” applies only to buggy whip thinkers, not to innovators.  Greatness comes from the pursuit of remarkable—as in, someone remarks about their experience.

In a progressive, growth-oriented world, people judge your position by the one you take, not by the one you propose. Until you execute, all decisions are just plain old intentions.  “I believe, I support, I approve” are all just weasel words unless they are coupled with visible demonstration.

Great leaders know that nothing changes, improves, grows or progresses until someone boldly executes.  True leaders question every current practice with the scrutiny of an innovator, not the restraint of a protector.  They never rest on their laurels, viewing present-day success as merely a training ground for improvement more relevant for the future.

They are results-focused—insisting meetings have an advance agenda with clear objectives and a precise length—rarely more than one hour.  They ensure meetings end with actions assigned to people who commit to execute something by the next gathering. They require tangible, irrefutable evidence that promised results have been accomplished.   They are fans of accountability.

“Shake and Fake” “Be Cautious” and “Look Busy” are understandable reactions to an oppressive economic era.  However, the time has come to help small business owners and employees break out of their protective game-playing and focus on productivity, innovation and growth.  It is time for leaders to either “change the people” or “change the people.”

And, those who insist on playing it safe (a.k.a., taking up space for high performers) need to become someone else’s problem.

So what do you think? Has your business been affected by any of this? Please share your thoughts in the comments below.

Article written by Chip Bell and John Patterson
Chip R. Bell and John R. Patterson are customer loyalty consultants and the authors of “Wired and Dangerous: How Your Customers Have Changed and What to do about it.” They can be reached at www.wiredanddangerous.com.