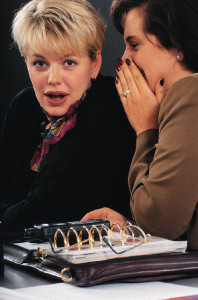 What is the one thing that entrepreneurs like to talk about least – their finances? Their client pipeline? Their sex life?

I would say that the one topic that towers over all of these is failure. No one wants to talk about how they fell short. Especially within earshot of their clients, or worse, their competitors. It is truly the subject that no one ever wants to touch.

Take my first major talk on customer service, at a large help desk conference. I’ll never forget driving hundreds of miles to Nashville on my own nickel, staying up late the night before preparing, getting up on the stage – and then a few weeks later, getting a form letter saying that since my audience ratings were just short of their cutoff of 3.75, I could never speak at that conference again, and have a nice day.

That was over 20 years ago. Years later I routinely got solid 5-out-of-5 ratings from most attendees, most of my speaking gigs led to more invitations, and I built a very nice living as a public speaker. Why? Because I failed.

I learned the hard way that I couldn’t just give an average talk with obvious information. Instead, I learned to focus on how to handle your very worst customer situations, and give funny, high-impact talks that were all meat from start to finish – and then the heavens opened up.

Personally, I am proud of my failures. Not just for the usual, motivational, I’ve-learned-from-my-failures reasons. They are actually a big factor in my success – and in my view, a necessary one. There are some specific, practical reasons why we should all be talking more about our failures. Here are just a few:

Most of us need to start there.

One of my favorite singers of all time, Al Jarreau, passed away recently at the age of 76. His body of work includes eight Grammy awards, and critics have described him as “the man with the orchestra in his mouth.” I don’t feel it would be humanly possible to sing better than Al Jarreau.

But a quick search will reveal that some of his earliest recordings, long before he became famous, were tepid cover versions sung by a very ordinary singer. Which is important, because without pitching those early innings in the minors, he probably never could have rose to the heights he did.

It provides a frame of reference.

My first customer service book for a major publisher tanked. And another one released by the same publisher that year became an enduring bestseller. Which was awesome, because now I could compare the two.

The other author’s book had a gripping opening, mine was pedestrian. His was endorsed by experts all over the country, mine had testimonials from friends and colleagues. His was an easy read, mine was long and verbose. I actually couldn’t have been happier to fail this time, because now I knew what to do next time – which is why my latest customer service book launched at #1 and has been a strong seller ever since.

Sometimes you want and need to fail.

Most of my consulting projects go swimmingly. But once in a great while, it is clear that I’m not a fit. I may not have enough expertise in that area, or don’t have the right writing voice, or whatever. Which is great! Because who wants to spend their waking hours doing something they are mediocre at?

I would much rather confidently hook people up with the very best resources – and completely rock the projects I do take on – than try to be a jack-of-all-trades.

If I never failed, I would never have a brand. And in all likelihood, would have followed short-term earnings instead of long-term skills, particularly early in my career.

So as far as I am concerned, failure rocks. And personally, I will always be more than happy to share my failures with anyone who asks. How about you?