Written By: Carol Roth | Comments Off on Four Rules for Client Selection in Business 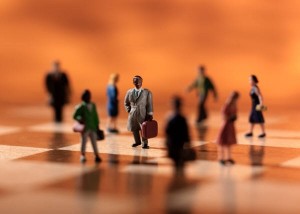 Who you work with in a business relationship – whether as a client, a collaborator, an employee or in some other capacity – can often make or break your business success.  However, we often ignore the people and focus more on the business and the operational aspects. This can be a big mistake that wastes your time, money and effort and can be an impediment to taking your business to the next level.

To that end, here are four universal truths that can help guide you through working with the right people in business, instead of partnering with the wrong people.

Crazy is crazy, which means that you cannot rationalize, explain or deal with someone who has one or more screws loose.  No matter how much money is involved, if you see a red flag – or a neon sign – get out of that client relationship as soon as possible.  It will not be worth the time, effort and opportunity costs that you will have to incur.  Remember, there is no ROI on crazy.

Universal Truth #2: Nobody Ever Thinks That They are Overvalued

This has a flipside as well.  While nobody thinks that their product, service, business or work is overvalued, there’s a really good chance that that they think yours is.  That’s just part of perspective.

Gordon Gekko famously said that greed is good.  But pigs get fat while hogs get slaughtered.  People who are too focused on every dollar often miss other important factors like value, business terms, time and opportunity costs, which all relate to success.

Also, watch out for those greedy individuals that are so combative that they are more focused on winning every battle than winning the war.  If their greed clouds their judgment about the big picture, cut bait or find a way to protect yourself, as that is a recipe for an unsuccessful ending.

Working with good, solid, people with credibility in their character is a sure-fire way to increase the odds of success.  It’s often overlooked, but good people are the enablers of great success.