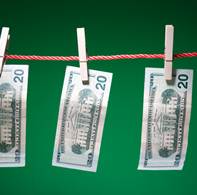 After devoting probably far too much time reading about financial deals gone awry and watching documentaries like CNBC’s American Greed which recount epic schemes of financial fraud and deceit, I noticed a pattern that runs counter to traditional intuition.

The perpetrators of these financial crimes were not only narcissists, but also had a propensity towards lavish spending. Dennis Kozlowski, former CEO of Tyco, was known for serious cash outlays, ranging from $6,000 shower curtains in his NYC apartment to throwing a $2 million birthday party for his wife in Sardinia complete with an ice sculpture of Michelangelo’s David urinating vodka. Al Parish, the Charleston Southern University economics professor who created an “investment fund’ that bilked over 600 individuals out of $90 million drove around town in a purple Jaguar with a leopard print convertible top. If these behaviors didn’t send up a red flag, perhaps they should have at least sent up an animal printed one.

We’ve somehow been taught that living the high life and a showing of wealth is a sign of success and financial competence.  You are supposed to dress for success, drive a fancy car and wear impressive jewelry to prove that you have attained some status.  Moreover, when someone has this perceived material success, we assume that they must have so much wealth accumulated that they can afford this lavish spending. But this is often not the case.  You need look no further than Hollywood or the professional athlete communities to see that spending fast and loose can quickly put even a multimillionaire in financial peril.

While there are of course exceptions to every rule, lavish spending should also raise concerns if not about fraud or deceit, but at least about misaligned financial priorities.  Think about some of the most successful investors of our time, like Warren Buffet. Politics aside, Warren is focused on wealth accumulation, not on making a show of his wealth.  He has always lived extremely modestly as a percentage of his net worth, ostensibly because he is driven by value creation, not spending. In fact, many of the wealthiest families and individuals I know are quite quiet about their wealth.  If you are wealthy, you know that by publicizing it, organizations and individuals tend to come out of the woodwork asking for a handout.

I think this is a critical lesson for managing your own finances, both in being sensible with your own spending, but also looking at those you are hiring to help you or to manage your finances.  The glitz and glamour that is interpreted as a signal of wealth may actually be better interpreted as a warning sign of someone who is a bit too cavalier (or far too cavalier) with their finances.

I also think that this has important implications for the U.S. government system.  As you are well aware of, we are $15 trillion in debt and have had a Congress that has spent money in excess of revenue taken in for as long as I can remember. I think this is logically tied to the fact that we tend to elect people to our Congress that are good at raising-and spending- money.  The more campaign money that they raise and spend on their campaign, the higher the likelihood is that they are elected to office, including the Presidency.  Perhaps it’s time we re-evaluated this and gave more credit to those doing more with less.  We would be well served- or at least, in my opinion, better served- by individuals who could create value and impact with a small amount of money, instead of rewarding those who are great at spending. Whether this is done formally through capping campaign spending or perhaps opening our eyes to the signals, it’s become clear to me that a good spender is not the best choice for any sort of financial management.

Even for your own business, how many times do you use the excuse that if you just had more money you would be more successful?

It’s time we learned to value those who do more with less to generate real ROI (return on investment) instead of just ROE (return on ego).