Written By: Catherine Morgan | Comments Off on Halloween Roundup for Small Business 2021 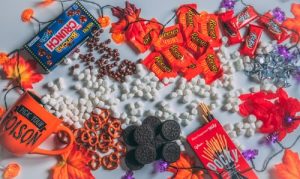 I couldn’t land on a single topic for today’s post, so I am going to share a few things that were amusing (treats) and some things that are kind of scary (tricks).

The first share is from our friends George Krueger and Mary-Lynn Foster at BIGG Success.

Their podcast is always clever and helpful for small business owners, but poem “Trick or Treat for Entrepreneurs,” an original poem/tale by BIGG Success, was really fun. It begins:

So he sought advice from a wise old sage,
On Halloween, to get a gauge,
Of whether to continue or not,
He would let the sage decide his lot.

Listen to the rest here.

Next up is something that was hilarious and I have never seen before, a local pizza place “dressed up” as a Domino’s Pizza. I’ve never seen a restaurant spoof another restaurant. See the picture and article here. They changed the menu to mimic some of Domino’s signature dishes and let the staff have fun with the concept for 10 days, “serving up a local take on Domino’s menu. That includes the Hawaii Honolulu (bacon, pineapple, ham, red pepper and red sauce), a spinoff of the pizza chain’s Honolulu Hawaiian. There’s also the Phil’s Cheese Steak (white sauce, steak, peppers and onion), based on Domino’s Philly Cheese Steak pizza.”

Now for some tricks.

Beside the 18-month trick that has been this #$%@& pandemic, I have been experiencing more prospect ghosting than ever, and that’s definitely scary.

People who tell me they are ready to move forward go dark for weeks or months. Sometimes they show up again, and sometimes they are gone forever into the dark night.

I don’t know why it is so hard for people to say they changed their mind or are not ready to move forward or whatever.

I had one person comment on my “tenacious” follow-up emails. The surprising part was he was a small business owner, so now I know why his business was struggling. The amount of times you have to follow up has gone up and up and up over the 11 years I have been in business. It used to be on average seven times. Now, I see people saying you need to follow up 20+ times.

That’s too much for me, but you definitely have to follow up with prospects to the point where it gets just a little awkward.

Revenue for many small businesses has rivaled the steepest drops of any roller coaster, including lows you probably never planned for because your disaster planning didn’t include a global pandemic. I know mine didn’t.

Even with all the scary stuff in business, I wish you a fun Halloween. I hope you have more treats than tricks.