Hold Your Friends Close and Your Enemies Closer

Written By: Rich Gallagher | Comments Off on Hold Your Friends Close and Your Enemies Closer 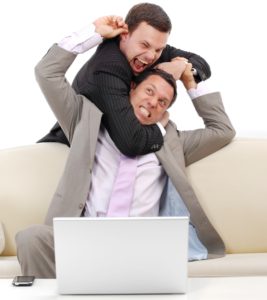 If you are in business long enough, you are likely to have your favorite “frenemies”: The competitor who beats you out for a lucrative project. The high-maintenance customer who always wants more. The supplier whose constant sales pitches have you rolling your eyes. Perhaps these people even have teeth-grating political or personality differences.

I would say that it is time to start seeing these people for what they really are: valuable contacts and potential sources of business. And you can start by choosing what kind of relationship you have with them.

I saw a great example of this a few years ago as I headed to a radio studio for a live interview. As I listened on my car radio, the host and his guest – who were oceans apart politically – were having a knock-down, drag-out fight on the air about the topic at hand. Think cats and dogs, or perhaps Republicans and Democrats. By the time I arrived, I expected the blood to be ankle deep on the floor.

Instead, I saw the two of them laughing and joking after the mic was turned off, and asking each other about their lives and families. The warmth and respect between the two of them was palpable. In that moment, it struck me that you can strongly disagree with one another and still truly be friends.

So back to your business. In my world, you would be surprised at how much lucrative business gets generated between people who were once quote-unquote “adversaries.” I strongly suspect the same is true in your world as well. Here are some of the reasons you should hold your friends close and your enemies closer:

They know you. Someone asks your favorite pushy salesperson who to hire for a big contract. Would they recommend you? That depends on how well they know you, what you’ve shared with them about your business, and – above all – how you’ve treated them in the past.

They know the business. When someone needs a speaker for an event, and I am already booked, who do you think I send the gig to? My favorite competitors, of course. Because I know they are good, and I respect them.

It’s the right way to be. At the end of the day, we only walk through life with one reputation. And much of that reputation is formed in sound bites of just a few seconds apiece, on the lips of people who are connected to us in one way or another. Do you want these sound bites to be good ones or bad ones?

My advice is to take a fresh look at the connections you have in your own business life, and re-frame these relationships as positive and constructive ones. If you are too quick to dismiss people as “bad” or annoying, you potentially miss out on the benefits you and these people might bring each other, now or further down the road.

When it comes to your business, you may discover that fraternization with the enemy is potentially a very good thing.