Written By: Margie Clayman | Comments Off on Leadership Lessons from Lincoln (Part 1) 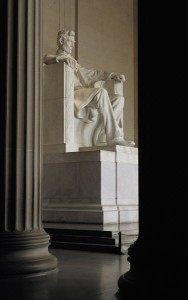 From Catherine: With the U.S. Presidential election just over a month away, and the debates going on in full force, a lot of voters are going to be thinking about leadership. Every Friday for the next five weeks we are going to be presenting leadership lessons that you can incorporate into your business from one of the most revered presidents in U.S. history – Abraham Lincoln – courtesy of Margie Clayman. Below we present leadership lessons 1 to 20:

Often times, it seems like people talk about leadership in the abstract. There are a lot of big ideas thrown about, but they all seem to have their foundation in an ideal world where your words and actions immediately have the impact you desire. I am not sure how useful this is to people who truly want to mold themselves as strong leaders. I thought I’d take a different approach and pull lessons from a great leader who was in a position of power during a time that was about as far from ideal as you can get. His name was Abraham Lincoln, and more than 150 years later, his style of leadership can still teach us a lot about how we can be successful leaders today.

1. Have a clearly identified passion

Lincoln first started to shine when he chose one goal – fight Stephen Douglas on the concept of popular sovereignty. While Lincoln didn’t state he was an abolitionist at this time, he knew he did not want slavery to spread. This gave him a fire he had lacked before.

2. Do not be afraid of competition

Competition can sharpen your skills and make you think more carefully about what you care about.

3.  Receive counsel from someone separated from your situation

In Lincoln’s case, for many years his counselor was his wife. A leader needs someone they can vent to without consequence.

4. Have passion for something outside your job

Lincoln’s great passion beyond all of his responsibilities and troubles as President was his children. They delighted him and he cared for them fiercely. Make sure you have at least one thing outside of work that fills your heart.

5. Always work on improving your self-expression

Throughout his life, Lincoln worked on his speaking and writing skills. There are snippets of poetry he worked on, his early speeches, and then his later speeches like the Gettysburg Address and his 2nd Inaugural Address. There are always more powerful ways to express your ideas, different ways. Search for them.

6. Make peace with your past

Lincoln had a rather sad childhood. His beloved mother died when he was a boy, his father was distant and perhaps even abusive, and Lincoln, though he wanted to read and learn, was hired out to work for other families. He could easily have let these things cloud his entire life, but in his 30s he visited his old hometown, walked the grounds, and seems to have made peace with all that went before.

Lincoln knew that he was not a highly refined Easterner. He didn’t have a college education. His mannerisms were weird and he was ugly. He knew these things and addressed them, thereby disarming his enemies.

8. Learn not to take yourself too seriously

One of Lincoln’s favorite stories to tell was one that focused on how a woman he passed by made a big deal about how unattractive he was. He made fun of how poor he had been, he made fun of his tall stature. While self-deprecation can be dangerous if taken too far, Lincoln showed that for all of the weight on his shoulders, he didn’t view himself as untouchable.

People don’t usually like to be talked at, they like to be talked with. However, telling a story can engage your audience while also allowing you to get your point across. Lincoln told actual stories but also talked and wrote in ways that evoked stories. A house divided cannot stand – this was a short story that the people of Lincoln’s time would have understood on a basic level.

Some would argue Lincoln did not always succeed at this. Disobeying the laws of habeas corpus as the Civil War began was not in line with his overall character, for example. But as a person, Lincoln remained honest and true to himself overall. This is a key for a good leader.

11. Weigh all sides of an argument

As a leader, it can be easy to rush to judgment. Lincoln frustrated his cabinet by waiting to free the slaves, and then he frustrated them again by not wanting to publish the Emancipation Proclamation as soon as it was ready. Lincoln did not rush to judgment, however. He listened to all opinions, incorporated his own, and decided what the best decision was.

Lincoln the candidate did not attend the Republican Convention even though it was in Chicago – a trip he easily could have made. He sent trusted friends, gave them directions, and they handled everything beautifully.

13. Learn to trust those around you

Lincoln would not have gone far without the guidance of William H. Seward, Edwin M. Stanton, and other trusted friends. He did not shield himself from advice or opinions. Instead, he sought them out.

14. Turn your weaknesses into strengths

Lincoln’s biggest weakness was his lack of formal education. Throughout his adult life he remained a voracious reader to help strengthen his weakest point, and he is now considered one of the most wise and eloquent Presidents in U.S. history.

15. Learn to deal with pain and disappointment

As a young man, Lincoln suffered severe bouts of depression, and in fact went through a time where his friends feared for his life. As his life went on, even though the tragedies continued to befall him, he learned how to remain centered. Even when his son Willie died in 1862, Lincoln remained focused on what he needed to do.

16. Empathize with those you lead

Lincoln visited soldiers who were in hospitals around Washington, D.C. and he often sent letters to widows or mothers who had lost loved ones in the war.

17. Learn to identify other great leaders

How would the war have ended if Lincoln had not seen that Ulysses S. Grant was the key to a Union victory? Do not think so highly of yourself that you overlook other great leaders with whom you can work.

There was almost always a line outside of Lincoln’s office of people who wanted to ask him a favor. Although it infuriated those around him, Lincoln continued to make himself accessible to all of those people.

Shortly after he took office, Lincoln was heard to say, “There’s too many pigs for the tits.” What he meant was that while he had promised jobs for many people, there simply weren’t enough available to satisfy everyone who came to him.

20. Stay on task but open-minded

Lincoln’s major task was the war, of course, but during his Presidency he also created land grant colleges and worked on other ways to improve the Union.

What was your favorite lesson? What are you taking away from this post. We would love to hear your thoughts in the comments below.