Written By: Lou Bortone | Comments Off on Mob Rules: Leadership Lessons From The Mafia 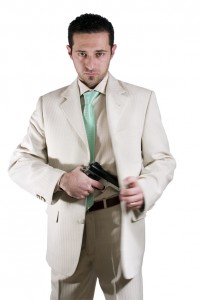 “I’m gonna make him an offer he can’t refuse.”  That one line from The Godfather is arguably the greatest and most quoted movie line ever.  Aside from being a memorable movie quote, it’s also a real-life negotiation tactic that’s been used in business for centuries.

The Mafia – whether in fact or movie fiction – has dozens of time-honored traditions that can still be used in business today.  I like to think of it as “Wiseguy Wisdom,” and I had a front row seat to it growing up Italian in what could easily be considered the Mafia’s “home town” of Medford, Mass.

Being raised in a neighborhood famous for gangsters never seemed that unusual.  I went to grade school with kids whose fathers routinely “went away” for extended periods of time, and some of our closest friends were “connected.”  It was even rumored that our little league was run by a mobster!

So what did I learn from growing up surrounded by “La Cosa Nostra?”

Fortunately, you don’t have to live in the mob’s backyard to benefit from “wiseguy wisdom.”  You can take some of those same Mafia management maxims and apply them to legitimate business.   And while you may not want to run your business by asking “What would Tony Soprano do?” you can still take some legitimate leadership lessons from La Cosa Nostra.

So what do you think? Do you have some other lessons to add? Are you going to use some of these in your business? We’d love to hear about it in the comments below.