Written By: Carol Roth | Comments Off on Making Your Dreams Happen 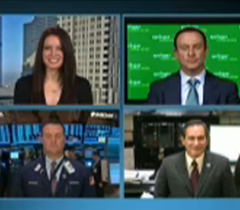 A few years ago, I made a decision to build a multimedia brand, with one of the biggest goals being having a career in television.  At the time, my sum total experience with television was watching it from my couch.  However, last week, I achieved my goal when I signed with my “dream channel”, CNBC, as an on-air contributor.

As Michael Jordan said, “some people want it to happen, some wish it would happen, others make it happen.” I fall into the make it happen camp.  Here are some of the things I did to make my goal happen that you can apply to your own goals.

Make it a goal:  You have to make your goal concrete.  Goals are not hopes and wishes as Jordan notes.  Be very clear on what you want, what time frame you are shooting for and define the milestones along the way that can help you get to your ultimate goal.

Put it out there: Telling people your goal makes it real for you and makes you feel accountable for it.  Most people don’t share their crazy goals for fear of failing, not realizing that sharing actually helps your success.  Plus, people are generally helpful if they know what you are trying to accomplish and how they can help you.

Take control of what you can: When I wanted to pursue national television, I worked backwards to identify all the steps I would need to take to get there until I found one that I could control.  It went something like to do national TV, I need to do regional TV; to do regional TV, I need to have experience on tape.  I did everything from produce and edit my own videos to enrolling in media training to improve my presence on screen.  Once I did what I could control, the next step became easier to accomplish.

Be willing to invest: To make something happen requires investments of time, effort and typically money as well. I was willing to invest three to make what I wanted to happen a reality, especially in a reasonable time frame.  Don’t expect that you can achieve your goals without investment.  If the payoff is worth it, make the investment.

No doesn’t mean never: In your process of trying for your goal, you will hear a lot of the word “no” or “not now”.  I had many conversations with many networks where they said that they liked me but didn’t have a slot open at the time.  However, I kept the relationships going, kept those individuals updated one what I was doing to update my profile and continued to circle back around.  People who said “no” at one point eventually came to say “yes”.

Have someone that helps you to keep your sanity: I was lucky to find people, including my good friend Todd Schoenberger, who I met in a greenroom at Fox, who had been through the process I was pursuing before me.  Todd and others were great sounding boards who provided emotional support whenever I was down or frustrated.  Seek out people who can provide you an outlet to vent or some insight you may not have.

Don’t let anyone take your power: In addition to the helpful people, I also met some gigantic a-holes that didn’t pull their end of the bargain and threw up roadblocks to my journey, to say the very least.  However, I knew that my success was ultimately dependent upon me, not any one particular relationship, so I never let any one person’s actions stop me from doing what I needed to do.

I am now on to my next set of goals and hope that my journey and tips can help you achieve yours.