Rules Were Made to be Broken

Written By: Carol Roth | Comments Off on Rules Were Made to be Broken

Whoever said that rules were made to be broken wasn’t kidding.  There is an important place for rules to establish order in society and even in business, but in most cases, it behooves you to approach your business with standards, instead of rules.

For example, take this bag of carrots that I purchased recently.

If you flip over and look at the label, you will see that ingeniously, the ingredients are labeled as such: 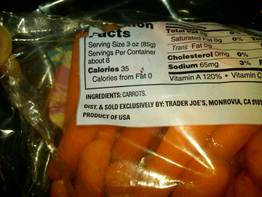 Yes, who would have thought that the ingredients in a bag of carrots would be…carrots.  Now, why do they bother?  Because there is a rule that says food needs to be labeled.  But in reality, it makes sense to have some stipulations and exceptions to the rule, such as if the only ingredient is the food inside of the bag, there’s no need to list it.

You probably have rules in your business when it comes to customer service, return policies, email protocol and more (if you don’t, that’s an entirely different problem to deal with).  But wouldn’t it be better to use some common sense and have standards instead?  Have a standard, but empower your employees to use their best judgment when handling issues, because there is almost always a logical exception to the rule.

This way, you get the best of both worlds, really. You have a standard system for employees to follow, but also give them the ability to make a customer happy or rectify a situation when common sense dictates a different outcome.

This should lead to happier employees, better morale and more happy customers.  Because who wants to do business with a company that is so stringent that they would- by choice- label the ingredients in their bag of carrots.