Written By: Catherine Morgan | Comments Off on Scarcity Mindset and Mean Girls in Management 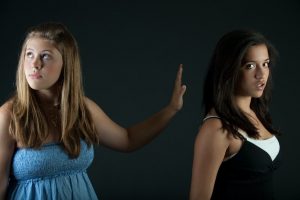 When people talk about the positive aspects of female leadership – inclusiveness, collaboration, emotional intelligence – I cheer. I am happy “soft skills” that were once devalued are getting a seat at the table, and are being included in leadership training. We all benefit from this.

However, the Wicked Queen is an archetype we all know from fairytales. Cruella de Vil and the executive in The Devil Wears Prada are great characters in fiction, but working for them is miserable.

When I talk about the dark side of female leadership, the air goes out of the room and people look at the door. Nobody seems to want to talk about this, and yet pretty much everyone has experienced it. When nobody else is around, people are happy to share their horror stories with me.

I reached out to leadership expert, Sarah Robinson, because I saw a post of hers on Facebook about how horrified she was by the meanness she was seeing between women in a work situation where they should have been supporting each other. I asked her if I could interview her for my upcoming book and she agreed. The conversation was so interesting that I wanted to share one part of it here with you.

Sarah believes that some of the “mean girl” behavior that happens within companies and teams comes from a scarcity mindset and offered a brain science explanation. I was definitely not expecting that. She said, “I have seen it’s a scarcity thing, and I’m not blaming our caveman ancestors, but I think some of this predates. I’m fascinated with backside of our brain because that’s where so much of our innate behavior originates, and we don’t even realize what we’re doing comes from that. It was programmed when we were hunters and gatherers, when just trying to stay alive and procreate was the thing. It was the only thing, picking the best person to procreate with so your kids would survive. The back of our brain has this scarcity thing baked into our DNA as women.”

This is by far and away the most generous explanation I have heard for the manipulation, backstabbing, information withholding, and bullying I have experienced from female colleagues and managers. (To be fair, I have also had truly great long-term relationships with female leaders, including Carol Roth.)

When my former executive assistant was interviewing for a position one time she told me, shaking her head, “Oh, it’s a she boss. I don’t know…”

Clearly, she’d had a bad experience or two in the past.

And there was my girlfriend in investment banking who said her colleague got a great promotion, breaking through the glass ceiling, and then the colleague pulled the ladder up because she had gotten there (and nobody else should have the opportunity).

Sarah agreed that both men and women don’t want to talk about it, but we need to start having these awkward conversations if we’re going to address this important issue. She said, “And I think until we can actually have this conversation out loud and discuss it as an objective thing – it’s not personal – it’s just an objective thing that we, as women, need to work on. And I see it. I see it a lot.”

Editor’s note: If you’re a woman in leadership who is struggling to speak up and be heard, I highly recommend you check out She Speaks with Sarah Robinson.