Setting Goals to Skyrocket Your Success

Written By: George and Mary-Lynn | Comments Off on Setting Goals to Skyrocket Your Success 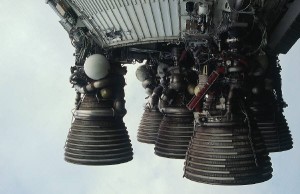 “Houston, Tranquility Base here. The Eagle has landed.”  ~ Neil Armstrong

These words were spoken on July 20, 1969 as three men – Neil Armstrong, Buzz Aldrin, and Michael Collins – landed a spacecraft on the moon for the first time.

They had launched their mission four days earlier, flying 203,000 miles to get there.

About six-and-a-half hours after they landed, with one-sixth of the people in the world tuned in to watch, Neil Armstrong descended down the ladder of the lunar space module.

As he became the first person to walk on the surface of the moon, he uttered those famous words:

“That’s one small step for man, one giant leap for mankind.”

We never get tired of hearing them. It gives us goose bumps every time. They are so inspiring. But we have to remember…

It began as a goal more than eight years earlier.

“I believe that this nation should commit itself to achieving the goal, before this decade is out, of landing a man on the moon and returning him safely to the earth.”

President Kennedy’s goal was very well-stated. It was a SMART goal. SMART is an acronym for Specific, Measurable, Action-Oriented, Realistic and Time- and Resource-Constrained.

Let’s look at each of these five components of a well-stated goal using President Kennedy’s goal as an example.

President Kennedy said that we were going to do two things:

You can’t get much more specific than that. In this case, it may be easier to think about what wouldn’t be specific. He could have said, “We’re going to land a man somewhere in space.” That’s not specific. He clearly articulated the destination.

President Kennedy’s goal was clearly measurable. We would certainly know if a man had landed on the moon. We could certainly tell if he returned safely to earth.

Note, though, that landing on the moon and then not being able to get back safely would have meant the goal was not reached.

Let’s bring this point on being measurable safely back to earth. Here’s an example of a goal that is not measurable:

“I’m going to increase my income this year.”

What does that mean? If you increase it by $1, did you really accomplish what you set out to do? A well-stated goal would be:

Now you’ll know if you accomplish what you set out to do.

When President Kennedy called for this mission to send man to the moon, he made clear that it would take tremendous resolve by the entire nation to reach this goal.

He called for innovation. He called for new money. He said it would take a concentrated effort for an extended period of time. But it would get done.

And get done it did. In a similar vein – with our personal goals or the goals we set for our businesses – we must commit to taking the necessary steps to achieve the goal.

President Kennedy said, “I believe we have all the resources and talent necessary.”

Your goals can and should stretch you beyond anything you’ve ever accomplished before. But they have to be realistic.

Otherwise, they don’t lead to the success you want. They only lead to discouragement.

This one’s easy. President Kennedy said we would accomplish this goal by the end of the decade. It was 1961. The goal was reached July 20, 1969.

He made it clear that resources would have to be diverted from other good causes if this goal was to be reached.

When you set your goals, be sure to give yourself a due date. When will you accomplish this goal? What resources will be required to do it? Do you have them?

Goal-setting is not goal-getting

President Kennedy was able to reduce all of this into a simple goal statement of 31 powerful words that set this course of events into action.

Because he wasn’t just a goal-setter, he was a goal-getter. Setting goals is just the first step in that process.

Just one final point: Good goals have a reason behind them. They serve a bigger purpose. So we’ll close with John F. Kennedy himself explaining why sending a man to the moon was so important:

Every goal should lead you closer to the life of your dreams!