Written By: Catherine Morgan | Comments Off on Social Media for Good Stories

I want to share two social media for good stories because we have so many of the other kind. I had such a nice time meeting a former Deloitte colleague recently. He lives in India but was in Chicago for a few days.

I loved seeing him in my Facebook feed enjoying a freakishly nice February weekend in Chicago. He was at Millennium Park taking the obligatory tourist selfies at Cloud Gate (aka The Bean). Later, I saw pictures of Navy Pier. He was clearly enjoying my pretty city.

Keeping in touch across the globe

What you don’t know is I left Deloitte almost 10 years ago!

When I was there, my group was part of Region 10, which included employees in the US and India. Mateen was very helpful with my projects and we have stayed connected on social media for years. I’ve enjoyed seeing pictures of his family and activities in my feed, and also following his career progression.

Because we’re connected on social media, he knew I still lived in Chicago and reached out to see if I might want to meet while he was here.

Without social media, we would not have stayed in touch and I would not have had a delightful coffee (he had a chai) with a former colleague who lives on the other side of the world. 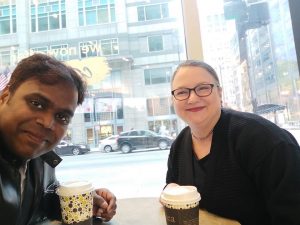 I have recently launched a new service offering: Working and Well™ facilitated sessions on managing stress, anxiety, and depression at work.

After I had already published and started promoting the landing page, I saw some content by Deloitte’s Chief Well-being Officer Jen Fisher and learned about her WorkWell podcast.

I thought it would be great to connect with her on LinkedIn and possibly get on her radar. I was a second-degree connection already so I could send a message to her. In 300 characters I captured why I wanted to connect:

Dear Jen, I was thrilled to see the way Deloitte is addressing well-being and mental health. Having worked at Deloitte, Arthur Andersen, and KPMG, I understand the challenges professionals face. I am writing a book focused on working and stress, anxiety, and depression. I hope we can connect.

She accepted my request within an hour.

I have started commenting on her LinkedIn posts, and hopefully over time I’ll be able to find the right point to have a conversation with her.

So, as we bash social media, let’s also remember some of the great things it can bring, too.