Case Study: Speaking for Free Can Have a Big Payoff

Written By: Catherine Morgan | Comments Off on Case Study: Speaking for Free Can Have a Big Payoff 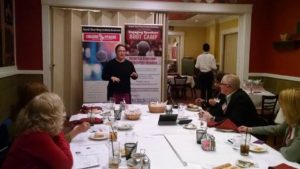 In the speaking world there are two tracks: paid speaking and free speaking. You either get paid to speak or speak to get paid.

Carol is a paid speaker and moderator for corporate and association events. I don’t know her fees, but I am sure she is well compensated. (Carol wrote an article for entrepreneur.com on how to start getting paid to speak.)

I speak for free at job search networking and small business events. And while I am not paid by the organizer, I always get business from it. In a recent situation, I will be making much more than if I had been paid to speak. Let me walk you through what happened.

An organization that I speak at several times a year called and booked one of my existing talks. They always draw a good crowd and I was happy to say yes. It’s a new year and I’m trying some new things, so I brought my colleague, Matthew Fox, with me. The organizer asked for a workshop on interviewing skills and we could do more spot coaching with two people.

It was a high-energy session and the participants were very engaged. About 70% filled out my sign-up sheet, which entitled them to a complimentary coaching session by phone with me. They also explicitly gave me permission to add them to my mailing list, so I will be able to market to them going forward.

Six even checked the box asking me to follow up with them by phone!

Over the following week, I had five 1-on-1 coaching sessions with participants. These generated two (possibly three) new clients. Given what they purchased, I will make at least $5,000.

To recap: I gave a talk I have given many times over the last few years, which only required 30 minutes of preparation, and generated at least $5K.

Now, if I were speaking for a corporation or association, I would have to create a brand-new talk or highly customize an existing talk. I might have to interview some people to better understand the audience’s issues. I would definitely have to rehearse – a lot.

As an example, my 18-minute TEDx talk involved at least 40 hours of rehearsal time.

As a newer paid speaker, I might not make more than I did speaking for free AND it would require a much bigger time investment.

As a solo business owner, I need to consider opportunity cost and whether the time spent developing a new talk would be better spent on some other aspect of my business.

So, all of you who get a little snooty about speaking for free, here’s an example of it paying off bigtime.

Please know that even famous paid speakers will occasionally speak for free – sometimes as a favor for a colleague or to support an organization they admire. A paid speaker also may waive their fees for an opportunity to get in front of a specific audience or to sell their books.

It’s worth noting that TEDx events don’t pay, and yet many paid speakers do them anyway.

Should you speak for free? You’ll have to evaluate if it makes sense for your business. However, if you have an existing talk, you might want to give it a try.