Telling the Whole Truth—and Nothing but the Truth

Written By: Mindy Mackenzie | Comments Off on Telling the Whole Truth—and Nothing but the Truth 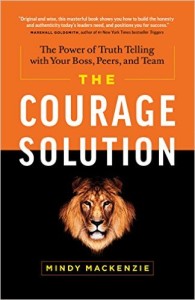 The professional landscape is rife with broken relationships, barely suppressed loathing and unresolved conflicts. Tension. Simmering power struggles. Complaints about colleagues abound—but are rarely directly to the one who needs to hear it the most: the person who committed the offense.

Why is this? Why do leaders create elaborate “work arounds” so they don’t have to deal with interpersonal issues, thereby wasting time, energy and, ultimately, resources? Why don’t leaders address their conflicts with one another head on? Why is truth telling in such short supply in corporate America today?

Avoiding conflict and uncomfortable conversations is a common human ailment—one the C-suite is not immune to. In fact, it can be easy for leaders to allow peer conflicts to fester, simply because they have teams of people who can act as a buffer between the department or function they lead and the colleague they don’t like or don’t trust.

We’ve all heard of C-suite leaders who refuse to speak to colleagues one office away (though the executives tend to behave civilly during forums with their CEO). Bruised egos, lack of trust, communication miscues—this all adds up to emotionally charged encounters and resistance, and missed opportunities for business prospects.

But there is a way for leaders to minimize—or wholly eliminate—lingering annoyances, and even outright clashes. It’s by truth telling. And doing that in a manner that yields positive results requires two important things: courage and vulnerability.

To effectively address a conflict with a colleague, especially when trust is frayed or broken, one must care enough to expend the effort (and experience discomfort). Because it is an effort (an immense effort at times). Dealing directly with someone to resolve a problem takes courage.

There is a rational reason people avoid difficult, potentially conflict-ridden conversations: they are awkward and the outcome is uncertain. People in general don’t like uncertainty. And leaders even less so.

Many leaders demonstrate incredible courage in dealing with business challenges that are complex or carry risk to the enterprise. Yet, these same leaders shrink back at the thought of walking into a colleague’s office to surface issues that are damaging their relationship.

Why? Because the type of courage required in those situations is tougher: it’s emotional courage, and goes beyond simply an intellectual exercise. And it involves the second important element of truth telling: vulnerability.

Dr. Brené Brown is a leading expert on vulnerability. As a research professor, licensed social worker, and author of multiple New York Times bestsellers, Brown has spent her entire career studying the topic. She defines it as “the willingness to show up and be seen with no guarantee of outcome.”

Thus, for a leader to improve a relationship and build trust, they must be willing to do something that has no guaranteed outcome of success.

During “the conversation,” the other party might deny there is an issue, minimize their negative behaviors, blame someone else or use myriad other “ducks and jabs” to avoid taking accountability. This is a worst-case scenario, and involves the typical excuses leaders give for not addressing an issue with their colleague head on.

So, it’s important for business leaders wanting to address conflicts and improve relationships to acknowledge that there are elements of risk and emotional exposure. But without these, real resolution is unlikely.

People intuitively know when someone is telling the truth and genuinely trying to make amends or resolve something. When courage and vulnerability are present, the outcome is far more likely to result in increased mutual understanding, reduced defensiveness, increased pragmatism and agreement on how to move forward.

How to Experience the Positive Payoff

Once a leader has determined to take the truth-telling route (versus maintaining the uncomfortable, albeit familiar, status quo), they must take three basic steps:

Here’s an example of these three steps in action:

An executive experienced a particularly poor behavior from an egotistical and bombastic peer. He scheduled a meeting with this colleague, at which he calmly told him, “I am really pissed off right now. I felt incredibly disrespected when you did X. It will be extremely difficult for us to have a good working relationship if you do that again.”

The guy was stunned by his colleague’s candor. And then manned up and apologized.

And he never did it again. At least not to this leader.

No fuss. No drama. No wasted time and energy.

Both parties will likely feel uncomfortable in such a conversation, but that discomfort is not an indication that the conversation isn’t working.

Dealing with issues directly creates the opportunity for both parties to fix what is broken so that a positive, business-as-usual equilibrium can be reached. Leaders don’t have to like one another, but they do need to work effectively with one another.

The leader who makes a practice of calmly and courageously telling the truth—the whole truth—to their peers in order to maintain the most productive relationships possible builds a reputation for integrity and trustworthiness.

The old adage “The soft stuff is the hard stuff” misses the mark. There is nothing soft about telling the truth courageously. It is one of the hardest things a leader will do throughout their day, but perhaps one of the most important.

Article written by Mindy Mackenzie
Follow @http://twitter.com/PointA_PointB
It was during her time as the Chief Performance Officer of the liquor giant Beam, Inc. that Mindy Mackenzie earned the nickname “The Velvet Hammer” for being able to lead her colleagues in a truthful but graceful manner. Prior to working at Beam, she spent five years at Campbell Soup Co. and nine years at Wal-Mart, advancing through various Senior Leadership HR and Organizational Development roles. She is the author of The Courage Solution: The Power of Truth Telling with Your Boss, Peers, and Team. (Greenleaf Book Group; May 3, 2016).