Doing Better With Less: The Laws of Subtraction

Written By: Carol Roth | Comments Off on Doing Better With Less: The Laws of Subtraction 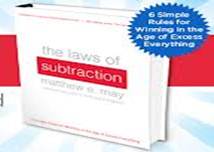 Here at Business Unplugged, we believe in principles like simplicity and focus.  Now, our friend and award-winning author Matt May takes these principles to another level in his new book, The Laws of Subtraction.

Here’s a short interview with Matt and as you read it, I challenge you to think about how you can create more with less.

CR: How do you define ‘subtraction’?

MM: Subtraction is defined simply as the art of removing anything excessive, confusing, wasteful, unnatural, hazardous, hard to use, or ugly…and the discipline to refrain from adding it in the first place.

CR: Why is subtraction need now more than ever? What are some examples of companies that use subtraction effectively?

MM: Most of the modern developed world suffers from excess. The simple life is a thing of the past. Everywhere, there’s too much of the wrong stuff and not enough of the right. There is endless choice and feature overkill in all but the best experiences. There are two sides, or perspectives—consumer and provider.

Amazingly, as consumers, we seem to put up with it. We tolerate the intolerable: stupidly standing in some silly line, searching for what we want through the convoluted floor plan of the local mammoth warehouse store, or struggling through the maze of whatever automated voice mail system we’re up against…opening a package of D-cell batteries, even.

You’d think that if we hate all the excess as a consumer, we would absolutely detest it as a producer. But we don’t. The reason we don’t is that we see no clear and immediate path to turning things around.

Twitter, Instagram, Southwest, Google, and Pinterest are all examples of disruptive companies that pared back an existing concept to defeat an excessive feature of an incumbent.

CR: How can small business owners use subtraction effectively?

CR: How do you know what is the right stuff to subtract or what to avoid adding in the first place?

MM: The key is to remove the stupid stuff: anything obviously excessive, confusing, wasteful, unnatural, hazardous, hard to use, or ugly. If you don’t know what that is, ask people on the receiving end of what you provide or produces. They are generally more than happy to tell you.

CR: Why is subtraction the mindset most needed for our times?

MM: Because all of us, whether we are a parent, a professional, or a president, face the same question: how do you stand out and stay relevant in a massively disruptive world in which everything is so overwhelming and distracting?

CR: Why is “less is more” the wrong approach and how is “do better with less” different?

MM: There simply is no limit on better. Most people can point out a handful of recent experiences where they’ve thought or said, “Please, no more.” When was the last time anyone said, “Please, don’t get any better”—unless of course you’re referring to a competitor or adversary.

Think about it. “Less is more” implies that more is better! It’s not. Better is better, and if you can get better by doing or using less—resources, time, money—there’s real power in that. I’m all about new and innovative thinking that produces better results by artfully and intelligently using less.

CR: What’s the first step to applying the Laws of Subtraction?

MM: I have three thought exercises I like to use as starting points:

The first is to create a “stop-doing” list to accompany your to-do lists, in the following way: give careful and thorough thought to prioritizing your various goals and projects and tasks, then eliminate the bottom 20 percent of the list . . . ​forever.

The second is to play “World’s Worst.” It’s the “anti-elegant solution” game. Whatever you’re contemplating, whatever experience you’re working on or trying to create, first paint a picture of the world’s worst whatever-that-is. Let’s say you’re trying to create the most effective and engaging new-hire experience at your company. What would be the world’s worst experience look like. When I do this with clients, they’re surprised not only at how much of that bad experience they presently deliver, but also how easy it is to identify what to eliminate or stop doing. It also helps enormously when you’re starting from scratch with any idea to identity what to not do in the future.

The third is to constantly ask and answer three questions:

You can pick up Matt’s The Laws of Subtraction everywhere that business books are sold, including Amazon.com.  Also, see more on Matt’s background below:

Matthew E. May is the author of three award-winning books: The Shibumi Strategy, In Pursuit of Elegance, and The Elegant Solution. A popular speaker, creativity coach, and innovation advisor to companies such as Toyota, Edmunds.com, Intuit and ADP, he is a regular contributor to the American Express OPEN Forum Idea Hub and The Rotman Magazine, and has written for Design Mind and MIT/Sloan Management Review.  He is the founder of Edit Innovation (EditInnovation.com), an ideas agency based in Los Angeles. He is a graduate of The Wharton School (MBA 1985) and Johns Hopkins University (BA 1981), but among his proudest and most creative achievements is winning the New Yorker Magazine Cartoon Caption Contest. He lives just outside Los Angeles.