The Online World is Breeding Cowardice

Written By: Margie Clayman | Comments Off on The Online World is Breeding Cowardice 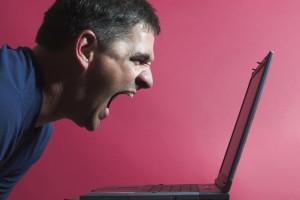 Awhile back, I was privileged to get a comment from Mr. Jay Baer on one of my posts. I adore Jay – he’s a no-nonsense guy who does his thing and does it better than most people around. In his comment, Jay noted that everyone is a tough guy sitting behind a computer. What he meant was that it’s easy to be mean, cruel, or crass when all you’re looking at is a computer monitor with 2D pictures of people flashing before your eyes.

There’s another way to look at Jay’s observation though. While siting in front of a computer may make people feel like they’re tough, in reality, it seems like what is really happening is the online world is creating a dynasty of cowards. How is this happening? Let me run down some examples.

2. You can sweep away dissenting opinions: Too often lately, I am seeing people who, when faced with a dissenting view, simply ignore it or say, “Well, that’s just a hater talking.” This is a cowardly move. Sometimes, people will disagree with you just to be a pest, but often they are raising legitimate points. Pushing away their perspective reveals nothing but your lack of faith in your own content.

3. You can hide behind other people: Sometimes, this phenomenon is called the “online flash mob.” Instead of facing someone directly, you comment to your community that someone is really giving you a hard time. You stir them up, lament your sad fate, and encourage them to fight on your behalf.

4. You can claim a lack of context: Because the online world does not rely on things like facial expressions or tonality in voice, it’s extremely easy to say, “Uh, no, that person just totally placed my words in an incorrect context. They tweeted words into my mouth.” This is an attractive option when compared with taking ownership of what you actually said, as well as how people may have taken those words.

5. Blaming poor behavior on other people: If you are caught behaving online in a way that makes you look bad, it’s increasingly easy to say, “Yeah, but I was reacting to that person. They started it.” In this way, a person can act however he or she wants without the responsibility that should accompany those actions.

The Way to Kick the Cowardice Out

It’s unfortunate that the online world creates such fertile ground for cowardice to grow, but there is one single powerful way to make sure you are not traveling on the cowardly path. Do you know what it is?

Taking responsibility for all that you say and do in the online world.

Now, granted, this can be a scary concept. It’s hard to criticize people when that criticism can come right back at you. It’s hard to voice your opinions and stick by them even when people tell you you’re wrong. It’s hard, very hard, to admit that you were in the wrong.

It’s also the quickest way to prove that you are a person of virtue and of high moral quality.

Say What You Mean and Mean What You Say

Defeating the temptation to act like a coward also involves refraining from saying things that you don’t really mean. If you don’t believe something, it will be hard for you to defend it to the utmost of your ability. If you’re saying something just to get attention or to drive traffic to your blog site, you will not feel the motivation to defend yourself in a courageous way. That is why it’s important, in the online world as well as in the offline world, to say things loudly that you believe strongly. Conviction trumps cowardice every time.

Yes, the online world makes it easy to play the coward. But you need not travel the path most easily traveled. The path to something better is clearly marked. Be genuine. Be unique. Be courageously, bravely, apologetically you.

Do you think that the online world is breeding cowardice? Have you seen some examples of this? Please share them in the comments below.

Article written by Margie Clayman
Follow @http://twitter.com/PointA_PointB
Marjorie Clayman works at her family’s full-service marketing firm, Clayman Advertising, Inc., which is celebrating its 57th year of existence. Margie is the 3rd generation of her family to work at the company, and she does so as Director of Client Development. In the non-working hours, Margie curates content at The Blog Library and creates her own content at MargieClayman.com. In the time that’s left, Margie works as the community manager at 12most.com.