Written By: Carol Roth | Comments Off on The Unexpected Business Lessons from Caine’s Arcade 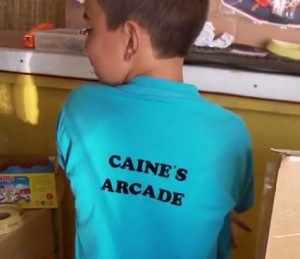 If you are one of the 3.1 million and counting people who have seen the viral video du jour, Caine’s Arcade, you were probably both touched by the story and inspired at the ingenuity of the 9-year old boy who’s eponymous cardboard arcade showcased true talent, ingenuity and entrepreneurialism.

But embedded in this heart-warming tale are the real lessons that may have gotten missed amongst the emotion.  First up is that even if you are clever, hard-working and entrepreneurial, if nobody knows that you exist, you don’t have a business.

In the beginning of the short film, Caine showed off his prowess in creating and assembling games from cardboard boxes and even generating an insanely clever method for checking the validity of a “fun pass” to allow you to play the games 500 times.  But, despite his fabulous offerings and insane value with the fun pass, Caine had no customers.

It wasn’t until good fortune happened upon him in the name of Nirvan Mullick, a filmmaker who took an interest in what Caine was doing.  There were likely countless others who saw this story first-hand, but didn’t take the interest in it or time to relate it.

With clear marketing savvy, Nirvan Mullick shot a video, leveraged social media and created a cause to create awareness (and ultimately visitors) to the arcade.  That effort was a rousing success, and continued to gain steam afterwards through the well-executed video and marketing program, which included a Caine’s arcade song that could be downloaded through iTunes and a Caine’s Arcade “Staff” t-shirt.

Without Nirvan, Caine’s arcade may never have gotten much traction (or he the encouragement he needed), despite his clear creativity and savvy.  And without Caine’s special story, Nirvan may not have had the viral video success.

So, a few business takeaways here, through my eyes:

While the likely takeaway is an emotional reaction to the entrepreneurial spirit of a 9-year old boy, if you look a little deeper you can learn an awful lot about business from what is not said in this video.