What Doesn’t Kill You Will Make You Stronger

Written By: Carol Roth | Comments Off on What Doesn’t Kill You Will Make You Stronger 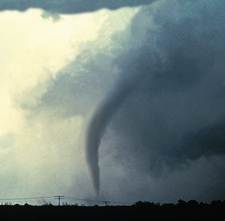 This blog is extremely personal and is a bit of a departure from my normal fare.  However, mindset is so critical to success, that I felt compelled to share it with you.

My senior year at Wharton and The University of Pennsylvania was a grueling one.  I had been interviewing for investment banking and other jobs for about five months- with about 75 different companies (no exaggeration)- before, in mid-February 1995, accepting an offer to work for investment banking firm Montgomery Securities.

So, when my boyfriend at the time, Justin, suggested that I join him and few friends in Florida for spring break in early March, it didn’t take me long to decide my answer: “No way”.

I was exhausted and all I wanted to do was go to my dad’s house in the north suburbs of Chicago and relax for a week.  I was always independent and didn’t feel the need to be attached to my boyfriend for Spring Break, so I sent him on his way to Florida with his friends and returned back to Chicago.

A few days into the break, the phone rang at my dad’s house.  When I answered, a sketchy sounding man said that he was a detective and wanted to speak with my father.  My dad wasn’t home at the time, so I said that he wasn’t available and offered to take a number.   He wouldn’t leave it.

A few hours later, he called back again and I got a distinct feeling that something was wrong.  He grilled me on when my father would be available, but wouldn’t tell me what the call was regarding or leave any contact information.

After another hour, the phone rang again.  I was on edge, but this time I recognized the voice on the phone.  It was Justin’s father.

My heart dropped into my stomach.  “Is he ok?” were the first words that I could mutter.

I can’t remember a lot of what was said next, but learning that my 21-year old boyfriend of a year-and-a-half, as well as another friend, had been killed by an out of control driver on a vacation where, should I had made a different decision, would have very likely placed me in that very car was a life changing moment in every sense of the word.

You often can’t control circumstances, but you can control how you react and respond to them.

To say that the days and weeks that followed were dark and bleak wouldn’t begin to scratch the surface. I didn’t know how I would pull it together and survive. But every day I reminded myself that I did survive; I wasn’t in that car.

You can say it wasn’t meant to be for me in that car. You can say that my independence saved me. Nobody will ever know.  But the “why” didn’t matter. What mattered was what I learned and that I chose to move forward.

What doesn’t kill you- literally- makes you stronger.

That was more than 17 years ago, but the lessons from that experience remain today.  Since that time, I, in my life that I am sure appears amazing to many, have endured my mother’s illness and death, my stepmother’s illness and death and my own 3-year battle with a debilitating illness. I have had people lie to me, steal from me, cheat me, harass me and treat me poorly for all sorts of reasons.  But the one choice in every circumstance that remained mine and mine alone is the power to choose how to respond and how to carry on.  I have lived the mantra of getting knocked down seven times and getting up eight. That car accident didn’t kill me, literally or figuratively, so I use that strength and the lessons learned from all of the other less-than-pleasant life moments to cope and find another way or path.

So, when things aren’t going well, I know that I can find a way to make it through.  As the saying goes, no matter the situation, “this too shall pass”.

You can plan, but you can’t plan for everything.

There is a Yiddish proverb that says, “Mentsch tracht, Gott lacht”, which in English translates to “Man plans, God laughs.” While I am a serious advocate of planning, circumstances are often out of your control.  This means you need to be flexible, adaptable and willing to pivot and deal with what comes to you, even if it comes out of left field.

While it’s great to have partners, advocates and confidantes along the way, the only person you need to fully rely upon is yourself.  You have no idea when someone that you depend upon may or may not be there, so don’t put your success or your sense of self, in someone else’s hands. Use your resources and your network, but at the end of the day, it’s up to you to take care of yourself.  Whether you like it or not, people will come in and out of your life- sometimes by choice, sometimes by the grace of God.

I hope that the next time you face an obstacle in business or life, that you are down or that you are going through your darkest days that my story and these lessons may provide some strength for you to carry on another day.  If whatever issue you have faced has not killed you, let it make you stronger.