Written By: Brad Shorr | Comments Off on 5 Biggest Marketing Mistakes Made by Small Businesses 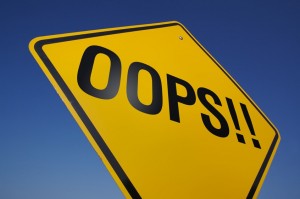 Marketing is tough for any company to get its arms around, and for small firms in particular, it’s easier to go wrong than to go right. Nevertheless, if you avoid making the following five mistakes, you are on your way to having an effective marketing function in your business.

The first order of business is to survey the entire field of marketing options. That way, if someone asks you why you’re spending so much time on email marketing or social media, your response can be, “Because these marketing tactics show more promise than paid search advertising, radio advertising, and five other options we considered.” In my entire career of consulting with small businesses, I have heard that response exactly never.

The other day I was dining with a client who had committed to magazine advertising – a terrific tactic for them – after wasting a couple years on other options (having failed to avoid mistake number one noted above). The ad, which I was reviewing, well – it sucked. The design was so cluttered and illogically laid out that Sherlock Holmes would be hard pressed to detect the offer. I suggested the client retain a professional graphic designer rather than dump the assignment on an untrained staffer. By doing so, the firm would have an ad that actually worked. Building a marketing program is like building a house: If you do it yourself, the roof is liable to cave in.

Entrepreneurs like to dive in and do stuff, but they also need to budget, create timelines and evaluate results. Those are the chores that allow a business to determine whether a particular marketing campaign is working, how well it is working, and whether it should be maintained, expanded, contracted or eliminated. If you are not able to make those determinations, you aren’t marketing – you’re meandering, and no business ever hit the big time floating down a lazy river.

Suppose you’ve invented a machine that turns copper into gold. Well, you must be some amazing genius, and your marketing content no doubt emphasizes that point, along with the long-version details of why you invented the thing and exactly how it works. But guess what? If you have a machine that turns copper into gold, nobody cares about you or how your product works. All those greedy, self-serving buggers want to know is, how much does it cost and where can I buy it? The better your product or service is, the less you need to talk about it. Unfortunately, the tendency is to do the opposite.

There’s nothing wrong with saying you sell a really sharp knife. You don’t need to say, IT SLICES TOMATOES IN THE DARK! A lot of small firms have no real experience doing marketing, and what they know is based on stereotypical impressions of marketing they pick up from watching infomercials and reading Fortune 500 brochures overloaded with corporate speak. If you tell people you have a knife that can fell a redwood in 30 seconds, nobody will believe you. If you tell them you have a new paradigm in knife technology, nobody will understand you. Stick to plain English and reasonable claims, and people will buy. Every business doesn’t have to be the business to end all businesses.

What can you add to the list of marketing mistakes? What’s caused you or someone you know to stumble badly?