Carol Roth on Overworking and Learning to Say No

Written By: Catherine Morgan | Comments Off on Carol Roth on Overworking and Learning to Say No 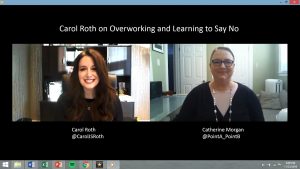 I’ve been talking to several clients about overworking lately, so I wanted to chat with Carol and get her thoughts on this. If you’ve been following this blog for a while, you’ll know that Carol’s a self-admitted workaholic. She loves the process and enjoys making things.

Wanting to be productive is great, but sometimes we get lost in busyness and don’t actually get as much done as we think we do.

And then there are the times when we are not responding to a crisis situation, but rather overworking ourselves because we aren’t prioritizing – or have forgotten that we can say no.

I don’t know a single entrepreneur who doesn’t struggle with this. You’ll definitely want to watch this short interview.