Five Ways to Help Women in the Workplace

Written By: Catherine Morgan | Comments Off on Five Ways to Help Women in the Workplace 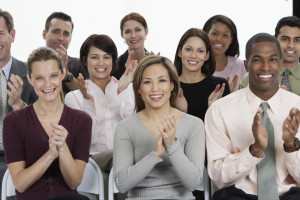 Carol shares some great advice in her recent post on entrepreneur.com, “How to Actually Empower Women Professionally.” Carol begins:

We’ve had women’s marches, strikes, Equal Pay Day and all kinds of other fruitless endeavors that purport to help women. Frankly, they don’t do a damn thing other than generate what I call R.O.E. (return on ego) on social media for their participants.

1. Think of women not as women, but as people.

A gentleman who ran a tech company recently sincerely asked on Twitter how he could better support women. As I noted there, the first step is to stop thinking of them as women and to think of them as people. Then, support them in the same way that you would support any other colleagues, junior staff and connections.

This includes — whether you are male or female — networking with women and providing formal and informal mentoring. This means that if there’s a job someone is are qualified for, alert her about it. If you have a say in the hiring process or a connection that does, recommend her for it.

Nurture a woman’s career the same way you would a man’s.

And, if you are female, don’t let your genetics create your narrative. Focus on your own actions. Don’t let the gender of one of your peers be a metric for your evaluation of networking opportunities, camaraderie, etc. This may sound obvious, but unfortunately to many, it isn’t and bears repeating.

Many successful people get ahead by advocating for themselves. Others lament self-promotion, but if you aren’t willing to advocate for yourself, how can you expect anyone else to do so?

So, if you aren’t getting paid enough and don’t speak up and ask for more, that’s on you. It also means caring more about your accomplishments and taking care of your goals and needs than being liked.