Franchise Opportunities: About those Businesses in a Box

Written By: Joel Libava | Comments Off on Franchise Opportunities: About those Businesses in a Box 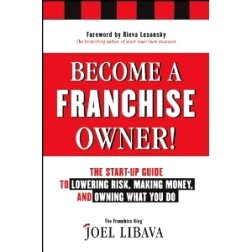 As Carol Roth says, “Never trust anyone who won’t tell you that you have spinach stuck in your teeth.” I couldn’t agree more. Like Carol, I also say what needs to be said, especially when it comes to business.

And that’s probably why more would-be franchise owners don’t use my advisory services.

While I love the business model of franchising and really feel that it can be a real path (for some) to The American Dream, it’s not a guaranteed path. As a matter of fact, becoming the owner of a franchise-type of business isn’t for most people. Here’s why:

Conventional wisdom seems to suggest that buying a franchise is a much lower risk proposition than starting a business completely from scratch. It can be, but not always.

My industry tends to use very enticing phrases that are designed to make you feel that there’s hardly any risk involved if you buy a franchise. Here are a few popular ones:

“Be in business for yourself, but not by yourself.”

“You’re buying a business in a box.”

It’s true that when you buy a franchise, there are already systems in place that are meant to help you start your new business in a very organized manner. In most cases, a team from your franchise’s headquarters is there during the first day or two, (sometimes longer) of your grand opening. So, you’re really not by yourself. That’s a good thing, and it’s one of the best things about franchising. A support system is in place.

If it was easy…

That’s because there’s this thing called “reality” that starts to set in. Sometimes, it sets in very early in the “I want to be my own boss, darn it” stage. It’s usually a week-long thought…maybe two. Then, a wave of nausea sets in, usually due to the mere thought of using one’s own money to start a business with no guarantee of a positive (and profitable) outcome.

Or it sets in late in the process. I’ve worked with former company CEOs with significant net worth and watched them curl up into the fetal position (figuratively) right before they were going to sign a franchise contract (and write a $35,000 check for the up-front franchise fee) because they couldn’t get past the fear part of investing in a business of their own.

The bottom line is that there is financial risk involved when you buy a franchise. It’s not because franchising is evil. It’s because there’s a possibility that you can lose your money if things go wrong. You can lower your risk by learning all that you can about the business model of franchising, figuring out if you’re a good candidate for franchise ownership, and then carefully choosing and properly researching the franchises that you’re interested in.

So, what do you think? Are franchises an easier or “safer” way to be an entrepreneur? Please share your thoughts in the comments below!

Article written by Joel Libava
Follow @http://twitter.com/PointA_PointB
The Franchise King®, Joel Libava, is an author, and the president of Franchise Selection Specialists Inc. Joel provides franchise advisory services to those interested in exploring franchise ownership. He’s frequently called on by the media for his no-spin insights on the world of franchising, and his first book Become a Franchise Owner! was just released.