Written By: Carol Roth | Comments Off on How the Mother-Daughter Founders of Mixtroz Raised More Than $1 Million 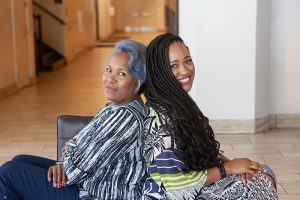 Raising capital and growing a business is a daunting task. Throw in being first-time, non-technical entrepreneurs, women, minorities and a mother-daughter team, and that may seem even more difficult.

Well, co-founders of Mixtroz, Ashlee Ammons and her mother, Kerry Schrader, took on that task and raised more than $1 million in their seed round, becoming reportedly just the 37th and 38th women of color to professionally raise that much capital.

So, what advice does this dynamic entrepreneur team have for you? I spoke to Ashlee Ammons, co-founder (and the “daughter” of the mother-daughter team), on her advice on navigating the capital-raising process and growing a tech business.

CR: Tell us about how you came up with the idea for Mixtroz?

AA: In 2014, I went to a conference to network and I had a firsthand experience with how awkward it is to make real connections with people in the digital age we’re living in. At the time, I was working in the hospitality industry and wanted to meet people within the beauty and fashion industries. I felt super awkward and uncomfortable while trying to make personal connections with people based on them having the same color dot as me on their name tag, as suggested by the event host. I started talking to my mom, Kerry, about this and together we decided there had to be a better way to meet people authentically in this day and age, so we came up with Mixtroz over the course of one night.

CR: How did you approach the capital-raising process? Did you have outside guidance, use connections, etc.?

AA: When fundraising for a business, you have to be able to tell a compelling story about the company you have created and how it will scale. We arrived in Birmingham, Alabama, in January 2018 to complete Velocity Accelerator, and from day one we were laying the track in the ecosystem to fundraise later. By the time we’d completed the accelerator, we’d gained data-based knowledge on why our business was working and the ability to discuss it with investors intelligently. Then, in May 2018, we had the opportunity to pitch AOL Founder Steve Case, winning a $100,000 investment there, which kicked off our official fundraising efforts. 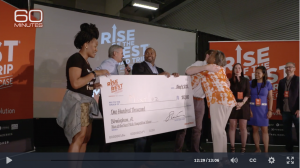 It took us an additional 6 months to the day of winning the competition to close a $1M round – but again, we started laying the track in January. Fundraising is a marathon process. We raised 90% of our funds in Birmingham through value-added networking. You must start laying down the foundation with potential investors months in advance of making the ask of them.

CR: What challenges did you face in raising $1 million+ in capital?

AA: Right now, most people who are investing in companies are older, white men. As African American women, it is sometimes challenging to get people who are different from us to buy into what we are building at Mixtroz. We’ve learned along the way that you really have to frame the conversation and pitch to potential investors in a way that helps them understand how the business works, and in a way that makes it relatable. For example, in one meeting, putting Mixtroz in terms of how a Rotary would use it made it easily consumable.

CR: Do you feel like you have faced unique challenges as women of color?

AA: Yes, we have faced challenges as so-called “Quad Outsiders,” that is black, female, non-technical, tech founders. In addition, we have an even more unique situation as mother-daughter where one founder of Mixtroz is a baby boomer and the other is a millennial. All of these individual elements have provided their own challenges as we have started and grown Mixtroz, but we recognize today that all of our differences have enabled us to see and solve the problem in a different way from everyone else, and that is really the core of entrepreneurship.

CR: What challenges do you face working as a mother-daughter team?

AA: The biggest challenge we’ve faced working as a mother-daughter team on Mixtroz is time! Work-life balance is one of the biggest struggles my mom, Kerry, and I face. There is no time that isn’t Mixtroz time. If something needs to get done, we don’t put it off, we get it done. It has to be this way in order to grow and scale our business. It’s also challenging to make enough time for other family members that are not directly involved with Mixtroz. When we’re with other family members, it takes real mindfulness to turn it off.

CR: What advice would you give to other entrepreneurs, particularly women and minorities, in terms of both business and raising capital?

AA: Women, and especially women of color, try to change ourselves too much to fit what other people want us to be. It’s extremely important in starting a business and raising capital to remain true to yourself – speak and live your truth. There were so many times at the beginning where I tried to filter how I behaved or talked to people. Over time I have realized that I can’t focus on that; I need to be authentic to myself at all times. If that turns some people off, that’s okay, they are not for me. I want to make connections and be in business with people who are interested in my authentic self, not some fabricated version of me. To push the business forward, I don’t have time to dance around the subject, I am direct and you should be, too!

CR: Is there anything else about the business or capital-raising process you’d like to cover?

AA: Starting a business and especially raising capital for a business is a marathon, not a sprint. If you’re not making the progress you’d like as quickly as you would like, you have to stay strong and not just throw in the towel right away. If you’re willing to give up after six months it probably means you weren’t that passionate about your idea to begin with. If you are passionate, you have to remember to stay the course and be patient. People often tell my mother and I how amazing all the press, awards, etc. are, and while yes, it’s great, they weren’t there years ago when I was literally crying in a closet. There are extreme highs and lows on the journey to realizing your life’s work.