Is Discontent Marketing for You?

Written By: Brad Shorr | Comments Off on Is Discontent Marketing for You? 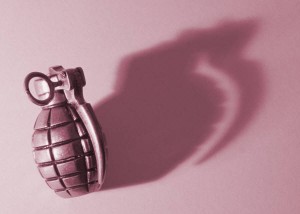 Extremism in the Defense of Marketing is No Vice

Taking a controversial editorial position attracts attention and gets people talking about your brand. It’s a risky strategy … but for some, it works.

The key to making it work is making it authentic. Most people are not cut out to be controversial. To an even greater extent, corporate entities sweat bullets at the very thought of offending a prospect, even if it is one prospect out of 10,000.

However, there are some people and some businesses that frankly don’t give a damn. They have no problem being cynical, iconoclastic, brutally honest or downright rude. Sure, they’re eager to do business – but only on their terms. For them, making the headlines is far more important than how they make the headlines: It’s the “no such thing as bad press” school of marketing.

Do you have the stomach for controversy? Are you up to the task? There are plenty of agitators to benchmark against among today’s newscasters and movie stars, but since most of them are buffoons, let’s look to a more intelligent past.

H. L. Mencken, the mid-twentieth century American journalist, was the cynic’s cynic, a man who slaughtered sacred cows until the cows came home, so to speak. Would you be comfortable saying things like this on your corporate blog?

“Love is the delusion that one woman differs from another.”

“If a politician found he had cannibals among his constituents, he would promise them missionaries for dinner.”

“Democracy is a pathetic belief in the collective wisdom of individual ignorance.”

“Every man is in his own hell.”

Your reaction to these statements will tell you whether you have a contentious temperament.

While I disagree with most of Mencken’s ideas, I greatly admire his technique. If you’re going to be a contrarian, be a good one. Whereas today’s talking heads make shallow assertions that are patently absurd, Mencken’s observations contain substance and require thought to refute. And whereas the tone of controversy today tends to be shrill and combative, Mencken is witty and his words invite discussion.

These points are critical if one plans to use a controversial tone in marketing communication:

1. Quality.  If your marketing content simply follows the herd, quality isn’t all that important. Why? Because if you’re just repeating the same old same old, nobody’s going to read your content critically … if it is read at all.

On the other hand, if you stake out a controversial position, readers will go over your content with a fine-toothed comb in search of flaws. You’d better be able to defend your ground, using facts, logic, practical knowledge and style as your primary weapons.

Example: Here’s a post no SEO pro wants to read: It’s the End of SEO as We Know It. The author walks readers through a fairly detailed history, and then uses all of the aforementioned weapons to make his case.

2. Good will.  I wouldn’t describe Mencken as a paragon of good will, but by today’s standards, he’s an acceptable model for treating controversy in a businesslike way.

If you’re going to challenge conventional wisdom, you should never shut the door on discussion. If you can’t distinguish controversial from offensive, do your company a favor and stay with the herd. Controversial business content must be delivered in a spirit of cooperation. Paradoxical as that sounds, it’s the only way to keep your customers on your side when you’re challenging their ideas.

Example: In July, a young writer stirred up a sh*t storm with a post titled Why Every Social Media Manager Should Be Under 25. It has attracted hundreds of comments and generated a good amount of constructive arguments.

Why Not Play it Safe?

An obvious advantage of creating controversy is attention. People will not only stop to read your controversial content, they’ll become curious enough to learn more about you, including the many benefits of your products and services.

Another, much less obvious, advantage is that controversial content can become in itself a terrific value-add. When you go against conventional wisdom, you offer insight and give customers a new way to look at an old problem. And even when customers disagree with your conclusion, they will value your ability to challenge the status quo and push them to improve.

So, here is the question, the action step: What situation or issue in your industry is widely misunderstood and mishandled by customers who can’t see what you see? How can you get the message across in a way that will sink in and create opportunities to set them right? Share your thoughts below.