We live in a time of business tactics.  Companies and individuals get so caught up in a project, idea or tool, that they forget about strategy.

Strategy tests purpose and goals and also thinks through opportunities and pitfalls.  When you put into place tactics without strategy, you open yourself up to a debacle.

Take the Oklahoma City Thunder NBA basketball team, for example.  For their home playoff game this past Saturday (which they won at the last second in a very exciting fashion), they gave every attendee a team shirt.  They beautifully displayed the shirts on each attendee’s chair: 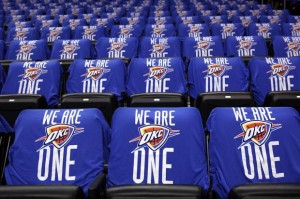 Photo by Sarah Phipps, The Oklahoman

This seemed like a fabulous marketing gesture to create a stadium filled with OKC supporters.  However, the shirts, given out at the Thunder’s home stadium, weren’t the color of the Thunder’s home uniforms (which were primarily white).  However, they were pretty much the exact color of the Dallas Mavericks’ away uniforms, which they were wearing to play that day.  The result, it looked like the entire crowd was rooting for the opposing team (the Mavericks instead of the Thunder).

Here’s a picture of the Maverick’s Dirk Nowitzki,with the OKC crowd behind him.  Notice how they match! 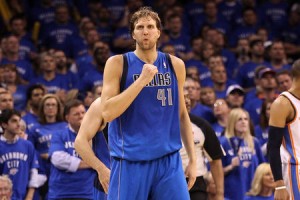 While it was a great idea to give everyone a shirt, the ball was dropped (pun intended) when they picked a color that matched the opposing team’s uniform.  Even if these were printed weeks in advance, the team could have gone through the likely teams that could have been Thunder opponents to make sure that on television and in person it didn’t look like the entire stadium was supporting the rivals.

Bottom line, strategy always should precede tactics and be used along the route as a litmus test for all decisions.  Otherwise you create a stadium full of supporters for your rival team during a playoff game.