Professional Growth: Sitting at the Feet of a Master

Written By: Catherine Morgan | Comments Off on Professional Growth: Sitting at the Feet of a Master 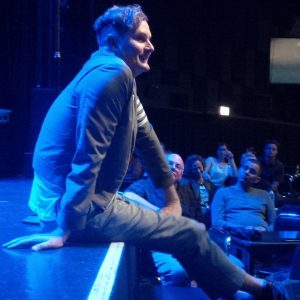 You might be drawn to them for the type of business they have grown, their speaking style, their social media content, etc. You may follow different people for different things.

I have been trying to up my content creation game and am trying to get psyched for my next push for my speaking. I have started actively following people who consistently put out content that I can’t wait to consume. Content that when they stop publishing and take a break for a while that I actually miss.

That might be the best way to gauge great content creators – do you miss them when they are gone? Do you find yourself going to their website or social media profile to see if you’ve missed something?

I have been following the work of Rob Bell for years. The last time I saw him speak was three years ago in West Hollywood. He was doing the How to Be Here Experience, which was 7 hours of him talking and answering questions in an intimate setting.

If you’re thinking that seems like an insanely long time to listen to someone speak, I would generally agree, but the time flew by and at the end I was wishing there would be more the next day.

So, I had to buy tickets when his new tour came through Chicago. And I had to buy the extra Q&A session at the beginning because I wanted to get close.

In fact, I got really close – about five feet away. And I watched how he answered questions, how he stayed present and fully engaged, how he made everyone who asked a question feel special, and how he spot-coached people on tricky topics.

I was riveted. I could have left after the Q&A feeling satisfied, but then I got to hear his talk, An Introduction to Joy.

Here are some things I love about the way he presents.

Rob frequently starts his talks by showing what he’ll be covering to demonstrate there is a flow to the talk, but what he shows you isn’t helpful. It’s frequently one word like “dogs” followed by “cats.”

He’s probably memorized these single words or phrases to cement the flow of talk. For him, these then trigger content and stories, which keep him on track.

As an audience member, I am left scratching my head, and wondering where he is taking this.

I had several belly laughs during the talk. Sometimes Rob poked fun at the current state of the world, and sometimes he poked fun at himself.

He showed a picture of him with his young boys and a wild haircut with dyed blond ends. He let the audience laugh and then said he clearly thought he was the lead singer for Everclear at that point. He then went on to deconstruct why he told the joke that way so he could get credit for both sides.

The way he stands for much of the talk looks like tai chi positions. This isn’t something I think I could emulate, but it seems to work for him.

He’s tall and uses the stage well, changing locations and leveraging these stances.

There was nothing on the stage except a stool and a spray bottle. I kept wondering what the spray bottle was for. Did he get hot and spray his face to cool down?

But no, toward the end he used it to demonstrate water vapor and mist, which was part of the story he was telling. He sprayed the bottle several times at different points toward the end of the talk. It worked.

I left the show feeling inspired by the content and the way he interacted with the audience during the Q&A and the presentation. I am still thinking about how I will try engage audiences and present content more compellingly.

Sometimes you need to be the student and learn from the master.