The Most Critical Component of a Conversation

Written By: George and Mary-Lynn | Comments Off on The Most Critical Component of a Conversation 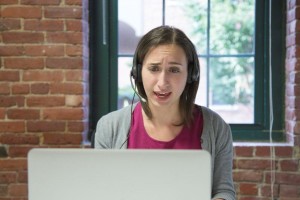 Not when it comes to communicating. The most critical part of any conversation takes place before the beginning. Here’s what we mean…

[Mary-Lynn] I called Michael, one of our tech people. I started talking about an issue we needed his help on. He interrupted me, “Who is this?” I said, “It’s Mary-Lynn.” He said, “Oh, hi, Mary-Lynn, how are things?” At that point, I didn’t know who was on the other end of the phone! It turns out I had called a different Michael, my former personal trainer.

[George] I called my parent’s house. A woman answered the phone. I said, “Hey mom, it’s your son.” I asked, “How are you doing?” She said, “Fine.” I inquired, “Is dad there?” She said, “Yes, I’ll get him. A man came to the phone. I started explaining why I was calling. He questioned, “What are you talking about?” I answered. He said, “Who is this?” At that moment, I realized I was talking to a dad, but not my dad. Even worse, in the same conversation I also had talked to a mom – but she wasn’t my mom.

Before you begin the conversation, you need to dial the right person!

Fortunately, we didn’t suffer any repercussions from our calls. (Well, we were a tiny bit embarrassed.) However, there are times when talking to the wrong person can have significant consequences.

You don’t accomplish anything. You waste time. You may get misdirected. You could become discouraged. You might even lose your focus.

So we want to discuss three situations where it’s important to talk to the right person.

Are you talking to an expert?

Don’t seek advice from someone who hasn’t achieved everything you’re trying to achieve. A lot of people like to give their opinions. They mean well. They may be family or friends. We love them dearly, but they can’t help us if they haven’t done what we’re trying to do.

It doesn’t mean they don’t have anything to offer. It just means you have to filter what they say.

Are you talking to the decision-maker?

This is particularly important when you’re trying to make a sale. Salespeople learn this early in their careers.

Need a loan? You have to sell someone on giving it to you. Can they make the decision? If not, find out who can and talk with them.

This also applies to buying. You may want to negotiate a better deal. Does the person you’re talking to have the authority to give you a better deal? If not, find someone who does.

Are you talking to a connector?

You may not know the person you need to speak to. No worries. Do you know a connector – a person who knows him or her?

It’s important to note the distinction here. “Six degrees of separation” doesn’t work in business. You need a direct referral.

If there’s more than one person between you and the person you want to have a conversation with, you have to keep networking until you get one step removed.

Fortunately, LinkedIn and other social networks are more open than our “real world” networks. It’s easier than ever to find that one person who can introduce you to the decision-maker you’re looking for.

Do you have a story of talking to the wrong person?