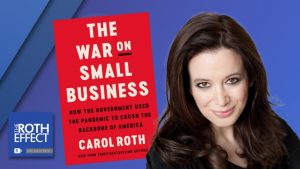 Normally, when you are the first person to market with a major topic, backed by a top-tier publisher, your book garners a ton of media interest. This was the position I was in, bringing the topic of “The War on Small Business” to publication via HarperCollins’ Broadside Books imprint at the end of June.

It was an honor, and a responsibility, to recount in great detail the economic consequences of the government reaction to the pandemic, starting with the government picking winners and losers, labeling people and businesses as essential and non-essential, based not on data and science, but based on political clout and connections.

It was imperative to lay out the story of the historic transfer of wealth from Main Street to Wall Street, where those with capital access thrived and others fought to survive. And, I provided a fully-sourced roadmap of not only 2020 and early 2021 occurrences, but of the path of centralized power among big government, big business and special interests that threaten wealth creation opportunities for average Americans and our country’s economic freedom.

With that background, you would think the media coverage of the book would be vast; my publisher and editor certainly did. Now, despite no shortage of efforts, three weeks since publication, I have received a total of zero book reviews from the main entities that would review such a book. I have appeared on zero morning television shows and zero primetime shows on major network or cable television. I say this as someone who has appeared in media, including on TV, regularly for around a dozen years. In fact, some of the entities who turned down coverage include shows where I have contributed on a variety of topics many times.

How could this be? There is clearly a wide audience for the topic, with half the US economy in the hands of small businesses, as well as around half the jobs, pre-COVID. The pieces that I was able to run on the topic in smaller and decentralized media did extremely well, so why the cold shoulder?

As I have thought through it, there are a few possible explanations. One relates to the over-politicization of everything in terms of parties, politics and people. If I had called the book, “Trump’s War on Small Business” or “Biden’s War on Small Business” or “The Democrats’ War on Small Business,” I’m sure it would have provoked partisan media attention. But, that would have been disingenuous, as the problem isn’t that of one person or one party, it is systemic. And the last thing we need is more partisanship. In fact, the war on small business is a topic that should bring people together, perhaps precisely why it wasn’t appealing to many editors and producers in the corporate press.

While the book was non-partisan enough to not appeal to click-bait, it was apparently too much of a hot button issue for the corporate set. Having been a long-time corporate speaker, particularly in the business realm, I was approached to do an event for clients and potential clients on the topic for a financial services related business. However, their outside PR consultant put the kibosh on that, saying they didn’t want the company to appear to be picking a side. While I can’t imagine the downside of picking the side of “not murdering small businesses that are the backbone of society,” apparently that was too controversial and cost me substantial book sales, as well as the opportunity to tell this important story to business leaders.

Another possibility for the book being ignored by the corporate media is that the media has been complicit in the coverage (or lack thereof) of this story and doesn’t want to get called out on it. Or, perhaps, they don’t want to upset their big business advertisers that pay their bills.

Finally, there’s the unintentional proving of one of the theses of the book; no matter how many times people tell you how important small businesses are, at the end of the day, people really don’t give a crap about them or “the little guy” getting screwed over by the government.

So, I have been mirroring what the small businesses I advocate for have to do every day; I went decentralized and found many other media sources, from the creator economy to non-morning or evening network programming and alternative networks to help spread the word on the topic, and will continue to grind and do so because it is important and small business owners deserve a voice and attention.

Let me be clear, this rant is not about me being a victim or “deserving coverage.” The book isn’t about me at all. It’s about the decentralized half of our economy and 99.9% of all business entities in the US and worldwide that keep getting shafted because they aren’t part of the club and they don’t have the clout and power. They do deserve to have their story told accurately, as it is already being covered up and rewritten. If that’s allowed to happen, we are going to find ourselves one day with just a handful of big corporations holding all the cards – and we are already well on our way; five tech companies at the time of writing now have a collective $9 trillion market cap.

The reasons behind why The War on Small Business is getting widely ignored by corporate media only makes it more important. I hope you will take the time to educate yourself and spread the word. The future of small business and economic freedom depends on it.

Author’s note: Thanks to Michael Malice for the inspiration for the article.