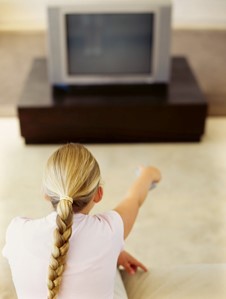 It wasn’t so long ago that the big TV networks pretty much controlled the media, but the Internet has totally leveled the playing field.  With free tools and resources like YouTube and Google Hangouts, small businesses can get in the game just like the big boys.  These days, it doesn’t take much time or money to create great marketing videos, but there are still some tips and tricks you can pick up from traditional television.  Here are three ways you can make your web videos more professional by following in traditional television’s footsteps:

Think of your videos as mini television episodes, with a beginning, middle and end. It’s basic storytelling.  The standard, three act formula for TV has been the same for decades.  Your first act is your exposition or set-up, and should include your premise.  The second act is the confrontation or “crisis,” which typically includes the rising action and setbacks.  In your online video, you can think of this as the problem you’re addressing or the challenge you are trying to solve for your viewers.  The third and final act contains the climax and resolution, where your story wraps up.  If you’re creating a how-to video, this would be where you reveal the solution.

Even a two- or three-minute online video should have a story arc, so keep in mind your beginning, middle and end.  You don’t need the traditional 22 minutes that most TV sitcoms use.  It’s possible to tell a compelling story in two minutes or less.  Take a cue from TV commercials and learn to deliver your message in easy-to-digest, bite-sized nuggets.

A great way to hone your message and deliver it as efficiently and succinctly as possible is to create 15-second Instagram videos – or even ultra-quick six-second Vine videos.  (Ask your favorite teenager for help!)

2.       Copy the NBC Nightly News format to start your videos

Check out the way NBC Nightly News with Brian Williams begins their broadcast every evening.  It’s a simple, yet proven format that you can use in all your videos.  NBC News opens with Brian Williams on screen and music under.  He announces, or teases, the top two or three stories.  After the tease, the music swells, the NBC Nightly News animation plays, and the voice-over announcer introduces Brian.  After the very brief, branded intro, the anchor re-appears on screen to start the broadcast.

The “tease/branded open/start” formula works because it hooks the viewer with a quick preview, then establishes the brand with NBC’s music and graphics – so the viewer knows they’re in the right place. You should replicate this format for your videos, whether you’re doing a half-hour newscast or a two-minute how-to video.

Start with a quick preview of what the viewer can expect, then cut to your own branded show open – even if it’s just a few seconds long. Then you can cut back to you on camera, where you deliver on the promise or tease you made at the top of the broadcast.

You may not have the resources to hire composer John Williams to score your music like NBC did, but you can find affordable, royalty-free music or jingles at sites like audiojungle.net.  And you don’t need to hire a Madison Avenue ad agency to produce your opening animation.  You can actually use your iPhone or iPad and the $3.99 “Intro Designer” app to create your own custom video graphics.

3.       Use the “SpongeBob SquarePants” rule to keep your audience engaged

Whether it’s the TV screen or the computer screen, no one wants to watch a static talking head video for any length of time.  Creating a video with one long shot or scene is the kiss of death.  Take a tip from Bikini Bottom, cartoon home of SpongeBob SquarePants.  Cuts between scenes on SpongeBob are every couple of seconds.  The pace is almost dizzying – so much so that scientific reports surfaced a few years ago claiming that the frenetic pace of the hit cartoon was actually taxing children’s young brains.

You may not want to transition between scenes to the extent that SpongeBob does, but you will need to include a variety of shots and cuts to keep your viewer interested.  The average television show cuts every 7 or 8 seconds, and that’s not a bad guideline for your videos.  Obviously, there will be exceptions, but you’ll have to mix things up and provide enough variety to keep today’s attention-deficit viewers engaged.

“Imitation is the sincerest form of Hollywood,” as the show-biz version of the saying goes.  So don’t be afraid to imitate or borrow from traditional television to create more compelling and watchable online videos.