What Your Business Can Learn from NHL Hockey

Written By: Carol Roth | Comments Off on What Your Business Can Learn from NHL Hockey 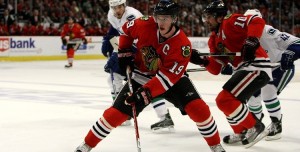 The NHL Playoffs are once again right around the corner (Go Blackhawks!), so I am all-in on one of my favorite sports. But, hockey isn’t just about skating, shooting and fighting—in fact, there are many parallels between great hockey teams and great businesses.

Here are a few things that you can take away from NHL hockey—without having to sacrifice your teeth!

Take shots, because it’s a numbers game. It’s not surprising that the famous idiom of missing 100% of the shots that you don’t take came from a hockey legend– Wayne Gretzky. It’s a fantastic reminder for entrepreneurs. Not only do you need to be willing to put yourself out there and take risks or “shots”, but you need to do so over and over again.

Teams that win at NHL Hockey usually do so by the numbers; the more shots on goal taken, the higher the likelihood that some will go in the net and the team will win the game. Business– in all aspects– is the same. You need to make a constant and large number of sales calls to convert leads. You need to be consistent with your social media posting day in and day out. You need to relentlessly court your top customers. Take the shots; they add up.

You are only as good as your weakest teammates. When a team repeatedly scores on another team, it’s usually because the team getting scored against has their third or fourth “line” (a grouping of players, where the weaker players are in the third and fourth vs. second and first line) out on the ice. While the superstars are expected to perform, the big issues usually come when the other team can exploit their opponent’s weaker players.

The same thing is true in business. One bad customer service experience, stupid social media post or non-engaged employee can undo the goodwill created by everyone else. That means that you need to be really careful regarding who you put on the team, train them properly and often, and also make sure that your best “players” are supporting any that may have weaknesses.

You have to take advantage of real opportunities. In hockey, a majority of the game typically goes by without major opportunities for scoring, but when such opportunities open up (maybe via a stolen puck or a bad line change), you have to capitalize on these big ones to win. Missing those infrequent but crucial opportunities means that you will probably go home with a loss.

The same thing goes in business. As an entrepreneur, you can’t afford to miss opportunities (such as landing a major client, critical employee or excellent public relations opportunity). If you don’t take advantage of momentum and big prospects that present themselves, the game won’t change for your company.

If you get knocked down, you have to get up again—quickly! Hockey is fun to watch because the players are allowed to hit (or rather, smash into the boards) players from the other team who have the puck. This means that as a hockey player, you get sent tumbling down to the ice hard- and often. That being said, the hockey players take the hit and immediately spring back to their feet. Any delay in doing so means that the other team will get an opportunity to score.

You need to do the same as an entrepreneur. Everyone has bad days, but you can’t dwell on them. You need to get back up on your feet- over and over again- and keep playing. If you don’t, there’s plenty of competition who will be happy to score against you- including courting and trying to convert your customers. And remember, you are lucky that you don’t have to wear skates while getting back up again.

You have to overcome the unfair. Life’s not fair and neither is business nor hockey. As a hockey fan- as is the case with most sports- there are a lot of questionable refereeing scenarios in every game. This means that there’s an outside force that could put you at a disadvantage because they aren’t calling legitimate penalties on the other team or are calling questionable ones on you. It doesn’t matter, because that’s the reality of each game and winning teams have to be able to overcome these extra environmental issues.

The same is to be said with business. You are going to end up facing regulations, unfair competitors and a whole slew of environmental crap that makes it harder to succeed. But, if you want to be successful, you have to ensure that doesn’t hold you back. You can still win with a focus on your own strong fundamentals.