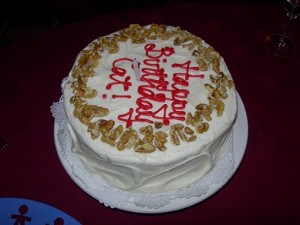 It’s a rush-rush world out there. A world of immediate gratification and 24/7 connectivity. It also is a world of a zillion shallow connections.

I have been really fortunate in this department. While my business is just shy of three years old, I have built deep and mutually beneficial relationships with many of the top minds in the small business space, including our congenial host, Carol Roth.

Carol didn’t just find me out of the blue and ask me to become the community manager for Business Unplugged™. We built a trusted relationship over time and I think it is a good case study.

I met Carol in February 2011, one month before The Entrepreneur Equation was released. I was fascinated with the launch she was orchestrating for the book. I never had any doubt that it would be a bestseller.

Carol was, literally, EVERYWHERE promoting the book before it came out. She was on every blog I read, every podcast I heard, speaking at events I was attending. To be honest, I wanted to know how she did that!

Carol was scheduled to speak at a networking group I was a member of but we had an insane blizzard that night in Chicago and we did an informal conference call chat instead. Funny enough, the organizer lost power in the storm and Carol had to do a lot of the call on her own. At the end of the call Carol asked us to tweet her and she would follow us back. I thought it was a nice gesture but never thought anything would come from that.

But I was wrong.

The talk was rescheduled a few weeks later, and after Carol spoke I went up to introduce myself. We had a casual chat and I went on my way.

Then we met again

I had been having a very nice conversation with Barry Moltz on Twitter and he was speaking with Carol at another event. I went up to introduce myself to Barry and he gave me a big hug and thanked me for all my support. I re-introduced myself to Carol. She recognized my twitter handle because I had been tweeting out a lot of her stuff too.

Then she reached out to me

A few weeks later, Carol reached out to me to schedule a short call to learn more about me and my business. (!) She said that she liked what I posted and wanted to learn more. I remember the timing well because her book had just come out and I was honored that she found time in her crazy schedule for me.

We had the most intense 15-minute conversation I have ever had. She asked very specific questions (of course), and at the end she said she liked what she heard and to reach out if I thought there was some way for us to work together. I kept that card in my back pocket waiting for the right opportunity.

I didn’t have the right opportunity to reach out to Carol but she contacted me again asking if I would like to do a guest post for her blog. My response was something like, “Hell yes!”

We worked together on the right topic and she liked my writing. She had a lot of posts in the queue and added mine at the end.

And then there was a bit of a wait

What I didn’t know was that Carol was reworking her site after The Entrepreneur Equation did so well. It took a long time for my post to get published, but when it did, it got a lot of comments and social media sharing. I felt like a big hit. And Carol was very pleased with it.

Carol had another big goal in mind after her book success – television. She needed someone she could trust to manage the blog for her. As you know, we post every business day and somebody does need to reach out to guest bloggers, manage the editorial calendar, etc. Carol asked me if I would be interested and I jumped at the opportunity to work with her and learn from her.

Now in March I have known Carol for two years – and it will be two years in the summer that I have been community manager for this blog.

It’s my birthday today and one of the things I am truly grateful for is Carol’s support and friendship. And for all the amazing people I have met while working on this blog.

You can do this too

My relationship with Carol was able to deepen and grow through chatting on Twitter and meeting in person. I have been able to build relationships with many others as well. In fact, I am giving a teleclass with another wonderful influencer, Bonnie Karpay, on March 21. Please join Bonnie and me for Business, Bourbon & Blues Review – Raising the Bar on Relationship Building.

So what do you think? Does this case study and timeline make it seem doable? Are there people you would like to have relationships with? Are you going to reach out to them now? I would love to hear your thoughts in the comments below. Or you can just wish me Happy Birthday 🙂